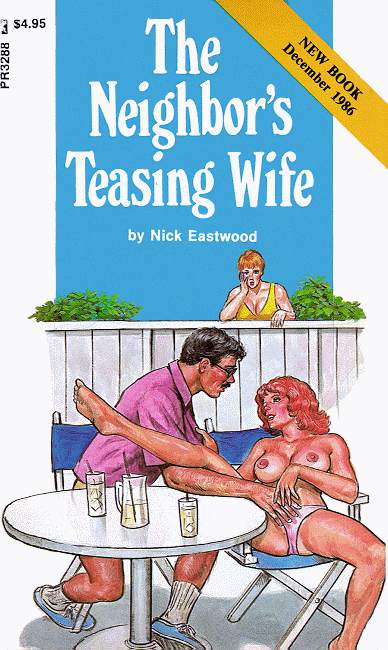 As the hot July sun soaked into her skin, Vicky Andrews felt like tearing off her bikini. She wanted to be totally naked, tan all over. But of course that would have shocked the neighbors.

"Darn," Vicky sighed softly. "I sure am getting some crazy ideas lately."

It wasn't just the idea of wanting to lie around stark naked in the back yard. Yesterday Vicky had gotten the hots for the mailman. He was new on her route, a blond hunk, and he'd looked terrific in his uniform.

Vicky felt ashamed of herself. She was a married woman, and she really did love her husband, Don. But they'd been married for seven years now, and their sex life wasn't as exciting as it used to be. In fact, Vicky thought sadly, it was about as exciting as watching paint dry.

She glanced around to see if anybody was watching, then pressed a hand to her pouting cunt-mound. She had an insane desire to slip her hand down inside her bikini and play with herself. Why, she hadn't masturbated since she was a teenager!

She didn't have to wonder what was giving her all these crazy ideas. She knew. She and Don just weren't making love often enough. He'd just been promoted, and he always seemed to be exhausted when he got home from work. He was just too tired for sex.

Vicky pressed her cunt-mound harder and felt a boiling heat in her pussy. She would have given anything just then to have a man. She imagined a huge stiff cock sliding into her cream-soaked cunt, and she moaned softly.

"Okay, Vicky, get a hold of yourself," she muttered.

Beating off in front of the neighbors wasn't the answer to her problem. But what was? She needed a lot more loving than she was getting, but Don couldn't give it to her. There didn't seem to be any way out of her dilemma.

Then Vicky was distracted from her problems when she heard voices from the next yard. That was the home of her best friend, Joan and her husband Frank. Vicky recognized Frank's voice now, but there was a female voice, too, and it wasn't Joan's.