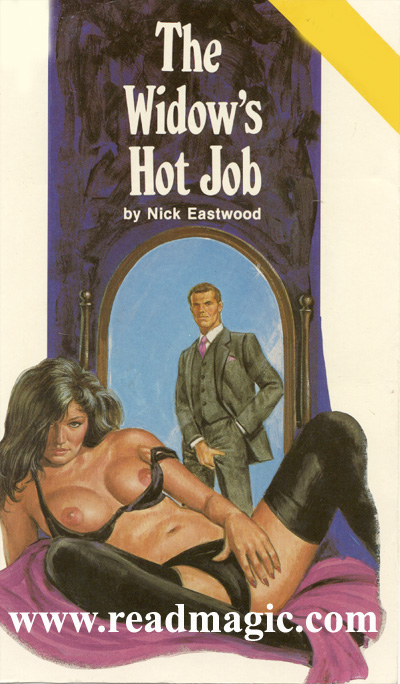 Patty Parker stood outside the tall office building, gathering her nerve. She hadn't looked for a job in years, but now that she was widowed and left without a dime, she didn't have a choice. She had to get a job, and fast.

The problem was, Patty had no skills. She was young, pretty, blonde, and had a fantastic body, but that was it. Ten years before, just out of high school, she'd gone job hunting, and she'd ended up marrying the first guy who interviewed her, Carl Parker, a wealthy older man. So she really hadn't had to develop any job skills.

Now Patty was sorry that she'd never trained for any line of work, but it was too late for that. She needed work right away. She'd just have to bluff at her interviews. The sales company of Henry Clark, Inc. wanted a receptionist, and she figured she could handle that, if she could just get past the interview.

Patty took a deep breath and entered the building. As she walked to the elevator, she noticed many good-looking men coming in and out, and for a moment she forgot her worries about a job. Since Carl's sudden death a few weeks ago, she'd been free to make love with men her own age, free to fuck as many guys as she wanted. She'd been too busy to take advantage of that freedom yet, but she was looking forward to it.

She'd loved Carl, and they'd had a pretty good sex life, even though he was old enough to be her grandfather. But now Patty was eager to fuck with some young bunks. After all, she was still young herself, still in her twenties. And, marrying so young, she'd never sown her wild oats.

As she rode the elevator up to the tenth floor, she wondered what had possessed Carl to leave all his money to the Humane Society. He must have figured that Patty was young and healthy and could take care of herself – but she wished he had at least left her money for some job training. She felt as helpless as one of those abandoned kittens or puppies that Carl was so concerned about.

She stepped off the elevator and faced a frosted glass door lettered: "Henry Clark, Inc." She swallowed hard, took another deep breath, and entered. She found herself face to face with a grim-looking older woman who glared at her.

"I've come to interview for the receptionist's job," Patty said.