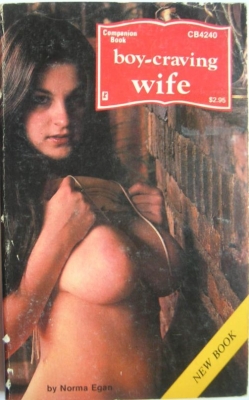 Edith Burns, a shapely big-breasted woman of forty, stood in front of her bedroom mirror stroking her pussy. Her finger played up and down over the slick hot lump of her clit, over the steamy wet flesh of her gash. Her husband Harold had indicated that he might want to fuck tonight, and Edith was almost too excited to wait.

"Are you coining to bed now, Harold?" she called.

From the living room came Harold's high tenor voice: "Just a few minutes, dear. I want to catch the rest of this program."

Edith sighed loudly. It must have been over a month since she and Harold had fucked, yet he seemed to be in no hurry. She felt desperate. Her starved pussy was swollen, aching, and soaked with oozing cunt-cream. Damnit all, she was a normal healthy woman who needed steady fucking, and her husband just wasn't giving it to her! Moaning with need, Edith rubbed her clit faster, harder. Melting waves of pleasure rippled through her belly. She was halfway tempted to bring herself off with her finger. But, no, she'd wait and hope that Harold would fuck her. A cock beat a finger any day of the year. She masturbated a lot, just to keep her sanity, but she much preferred the real thing, a good stiff prick in her juicy little cunt.

As she fingered her swollen moist clit, Edith studied herself in the mirror. She was tall, a stunning red-haired beauty with tits the size of small watermelons. Her rosy-red nipples were large and cone-shaped. Her fiery-red bush was thick and expansive, covering half her lower belly. Her curvy body was still firm and sleek, even at forty.

Not bad for a woman who'd been married twenty years. Edith was still damned attractive, and she knew it. Too bad she had to waste it on Harold. She spun her fingertip around the soaked hot shaft of her clit, moaning softly as the heady pleasure washed through her belly. Just once in her life she'd like to fuck somebody besides her mousy, scholarly husband. There had to be men in the world who were more interested in fucking than Harold was.

"Ohhhhh, God, I need it so badly," Edith moaned.

In the early years of their marriage, they'd had a normal sex life, but lately Harold hardly seemed interested at all. Edith and her husband ran their own private school, the Burns School for Boys, and when Harold wasn't teaching, he was off in the woods looking for butterflies or watching birds. Or reading or watching TV. He was only fifty, but he might as well have burn eighty.