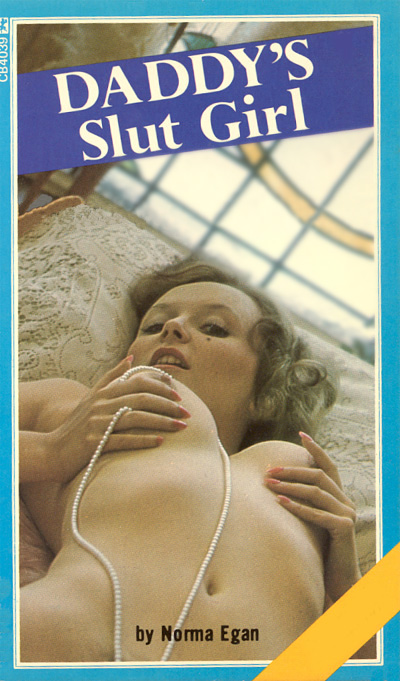 The teen watched Cindy Cameron leave the car and walk towards her apartment building. He noticed wistfully how her round, compact little butt moved back and forth as she walked in an unconsciously sexy way. Cindy's long, golden blonde hair shimmered, clean and healthy, under the street light. She was a little girl, not much over five feet tall, but she was beautiful, and she had a fantastic body. The teen wished now that he'd had the nerve to try putting the make on her, but it was too late now. Perhaps on their next date.

Cindy entered the apartment building and walked slowly up the three flights of stairs to the small apartment she shared with her father. She was smiling, day-dreaming, and in no hurry. She was eighteen, and she'd just had her first real date. Pop didn't know about it, of course. He didn't allow her to go out with boys. But Cindy felt the time had come, and she was glad she'd snuck out for movies and hot dogs. It had been great fun, and something about being alone with a guy at last had strangely excited her.

She remembered the mild and rather pleasant odor of young male sweat, the way his body had brushed hers a few times, and she sighed. There was a warmth, a moistness, in her cunt which Cindy had never experienced before. She wished her date had tried to kiss her, to feel her up. She was dying to know about those things.

"Pop?" Cindy called as she entered the apartment. "I'm home."

She glanced in the little yellowed mirror beside the coat rack. She was pleased at how pretty she looked, with her big blue eyes, upturned nose, and white even teeth. She hoped the guy had found her pretty, too, and that he'd ask her out again.

Cindy started as she heard a loud crash, like glass breaking, in the kitchen. Then her father staggered into the living room and stared at her. Oh, God, she thought, he's drunk again.

George Cameron, at forty, was no prize. A big beefy red-faced man with thinning, oily brown hair, he neglected his personal appearance and made his low intelligence even dimmer by drinking too much. He had been a factory worker. Now he was out of work.

"Where the hell you been?" he growled.

"I told you, Pop," Cindy said calmly. "Jenny and I went to the movies."

He grinned wolfishly at her, his little bloodshot eyes gleaming. "Oh, no, you didn't," he said, slurring his words a little. "You can't fool me this time. I was lookin' out the window when you come home. I seen that guy."