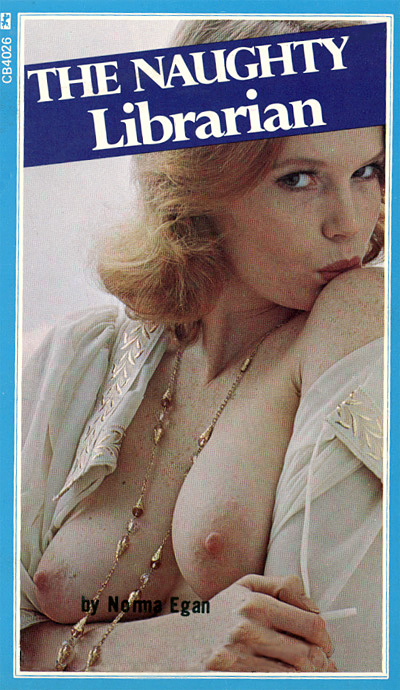 Miss Kay White, head librarian of Ferndale High School, flushed slightly as she studied the new sex-education text destined for use in the tenth grade. No one had been that explicit about screwing when she was a teen-ager. Perhaps it was a good thing, though. If she'd known then what she knew now, she might have saved herself a lot of trouble.

Kay White was twenty-eight and single. From the time she could talk and ask questions, her mother had put her off about sex, except to tell her that it was "evil" and that men "want only one thing from a woman". Kay grew up so shy and frightened of men that she'd hardly even dated in high school and college, and had never gotten close enough to a boy to encourage a serious courtship. So here she was, close to thirty, and without a man of her own.

It was a ludicrous fact, considering Miss White's stunning figure and face. Tall and long-legged, she was the kind of woman who made men turn in the streets and gawk.

Her tiny, firm waist blossomed out into trim, flowing hips, and her tits were larger than average but quite firm and jutting. Her face was that of a haughty Spanish noblewoman – olive-skinned, full lips in a sensuous pout, great dark eyes with heavy black lashes. Her raven-black hair was thick, shiny, and abundant, cascading to her waist.

It would have been difficult to believe that this woman had only been fucked once in her whole life.

Kay often thought back to that incident, the loss of her virginity. It was in her freshman year of college, when she was still very ignorant about sex and terribly afraid of men.

A senior class boy named Vic, ruggedly handsome and a first-string member of the football team, had taken a strong interest in her and had finally persuaded her to walk across campus with him for a Coke. Or so he'd told Kay. It seemed safe and innocent enough to her, and she'd been rather excited about it. Vic was very attractive and popular, and she felt flattered that he wanted to date her.