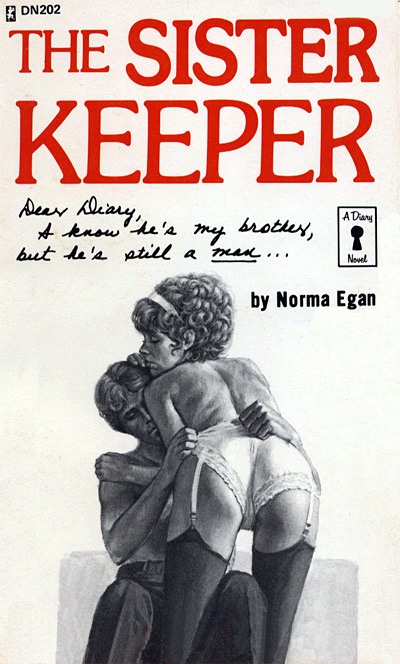 There was so much to talk about that Jonathan didn't know where to begin. He glanced at his twin sister Jennifer as she rambled on about the plane ride, what the weather had been like in England, and as she talked, Jonathan couldn't help but notice her figure. Dressed in a short-skirted blue suit, he made out the firm figure of her bulging breasts, trim waist and shapely hips. As she crossed her legs to get more comfortable in the car, Jonathan heard the sensuous sound of her nyloned legs rubbing against each other.

He was glad that the drive from the airport was almost over. Had it gone on for one more mile he knew that Jennifer would start to notice the bulge of his cock as it crawled along his pant's leg.

Then they were at the hotel, walking hand in hand through the lobby. As they stood near the elevator, Jennifer turned toward him and looked directly at him. Jonathan smiled somewhat embarrassedly.

The situation seemed awkward and funny at the same time, and for a moment they only laughed. Jennifer thought quickly of all the strange events that had led up to this meeting – how their mother had died giving birth to them and how their father, busy with all his money-making schemes, had given the twins to relatives, Jonathan to maternal grandparents in New York, Jennifer to an aunt in England. Brother and sister had had to wait twenty-three years before actually laying eyes on each other. But now they would be together. Their father had died, leaving them his one successful business venture, a plush resort-hotel in California, and the twins had agreed by mail to come out and manage the place.

Jonathan still held her hands tightly, and Jennifer felt unaccountably happy. "I was just thinking," she laughed, "how much we'll have to tell each other before we're really acquainted."

Jonathan laughed, too. "I know! Crazy situation, isn't it? We're twins, and we don't even know each other! But we'll make up for that tonight. I've arranged for us to have dinner in your room, and we'll tell each other all about ourselves."

Holding her hand, he led her up the steps and into the gaudy, cavernous hotel. People smiled at them, and Jennifer knew it was because they made such an attractive couple. She thought again how handsome Jonathan was, so much more attractive somehow than Ben, the big, bumbling university student to whom she had been engaged for three years – Ben, who had angrily broken off their engagement when she announced her plans to come to America and manage the hotel. Ben, whose awkward but frantic passion had claimed her virginity, had possessed and devoured her body many times, but had somehow never brought her to an equal sexual level. But she had promised herself not to think of Ben. That was over and done with.

Jonathan kept his word. After Jennifer had showered and changed her clothes, they had dinner in her room, an indecently luxurious feast of filet mignon, salad and champagne. Then they talked. There seemed to be an endless number of things to know about each other, and it was after midnight before they began to run out of ideas.

Then Jonathan, now stretched out on the bed, grinned at her and said, "We haven't talked yet about the most important thing of all. Tell me about your love life."

Jennifer blushed and giggled. "You're kidding, of course!" She lounged in an overstuffed chair, her small feet propped up on the bed, feeling a little drunk from the champagne.