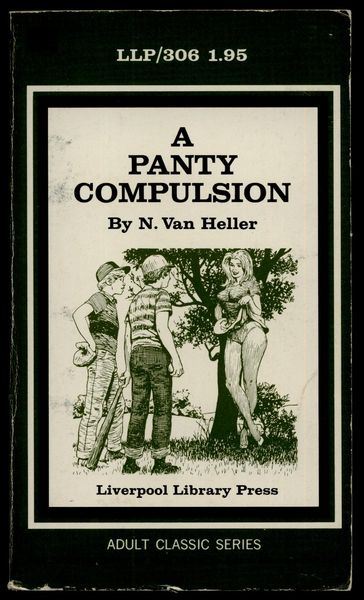 The long low Jaguar cruised through the park like a slinking animal stalking its prey, pausing for a moment while the voluptuously sensual woman inside shifted gears, then the car soared effortlessly up the winding road ahead.

At that moment, Sally Baxter, the honey-haired blonde behind the wheel, was hardly aware of the battered black Plymouth following several hundred yards behind. Other things were whirling through her mind… other more important things… like handsome young boys! She knew she would find them here… she had to find them!

It was getting urgent now. Her head was pounding, her throat was dry as sandpaper and a strange nervous trembling had seized her entire curvaceous body so that her hands shook noticeably as she held the steering wheel. A light sweat began to break out on her forehead as, almost unconsciously, she reached for the top button of her blouse and undid them one by one. Casually, the flimsy see-through material fell away from the ripely swelling cleavage of her young breasts until just a hint of the rich white mounds protruded from her brassiere.

Slowing the flashy sports car to a prowl, Sally hungrily scanned the fields along the side of the road… God, nothing yet! Where were they all hiding, those young innocent boys that she needed so badly? Didn't they know she wasn't going to hurt them? Didn't they understand that she needed them… needed them to watch her as she spread her legs apart and salaciously ran her fingers over the soft silkiness of her white bikini panties?

If only she could control herself… but she had been possessed by the lewd urge to expose her panties ever since the age of thirteen… ever since the obscene day when her uncle had come into her bedroom and locked the door behind him. God, she could remember every second of the depraved experience now… the twisted lust-contorted expression on his face, the filthy things he had said to her… even the way he had moved menacingly toward her as she backed off toward the wall step by step.

Her mind's eye blurred in confusion as it focused on a tangle of arms and legs, as it watched herself as a young helpless girl being thrown on the bed, her clothes violently ripped away from her until she was left with nothing but her little white panties, struggling to hold them on while her passion-crazed uncle fought to tear them away.

Even now the memory of the wicked event was making her head throb like a jackhammer. And then, miraculously out of the corner of the eye she sighted what she had been looking for all along!

There at the side of the road only a hundred feet away stood a whole enticing group of teenage boys gathered around a picnic table… handsome innocent young boys who sent electrical thrills pulsing through her grown womanly body. No, Sally, no, a tiny inner voice warned her. Don't do it here, there are too many of them. They'll tell someone, you'll be discovered. Wait, wait, the voice cautioned, though her loins were already burning with a forbidden passion that could only be satisfied by the lewd act.

The obscene temptation was unbearable. Those young boys were gaping wildly at her now, they had seen the suggestive way she had undone her blouse. God, they were so youthful, so responsive. They were whistling at her. Her warmly pulsing pussy was beginning to throb and ache all over as the first tiny droplets of excited moisture seeped into the close clinging crotch-band of her skimpy panties. The tiny voice inside her mind began to scream and shriek at her, until in response she jammed down on the accelerator, lurching the car powerfully up the road ahead only to leave the young boys dangling behind in their lewd daydreams.

At that very moment the stocky man in the black Plymouth stepped down hard on his own accelerator, inadvertantly jostling the expensive movie camera laying on the front seat. Catching it out of the corner of his eye, he winced painfully. Hell, Nestor, he chided himself, you can't take chances with an expensive piece of equipment like that, not when it's going to get you all the evidence you need on that sexy Baxter dame.