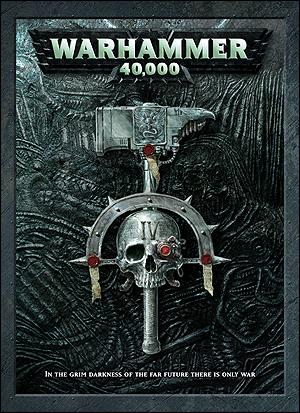 The question is not when, but how, will I die?

It is better to die for the Emperor than to live for yourself.

The blood of martyrs is the seed of the Imperium.

Curse now the death in vain.

Life is a prison, death a release.

By the manner of our death are we judged.

The wise man learns from the deaths of others.

Death be thy compass.

Not even the dead know the end of war.

The dead watch over us and guide us.

Death is the servant of the righteous.

Glory in death is life Eternal.

Official! The graves of warriors who have given their lives for the Emperor now outnumber the stars themselves.

Even a man who has nothing can still offer his life.

Warriors of the Emperor seek no reward but death.

Fear not death, for the soul of the dutiful man never dies.

By the manner of their death we shall know them.

Life is the Emperor’s currency, spend it well.

No man died in His service that died in vain.

Dying for something is greater than living for nothing.

The dead cannot cry out for revenge; it is the duty of the living to do so for them.

What a pity it is that we can die but once to serve our Emperor!

True happiness stems only from duty.

Better to self-destruct than acquiesce.

Your freedom must be bought with the currency of blood, toil and tears, a price all men pay.

Excuses are the refuge of the weak.

Perseverance and silence are the highest virtues.

Only the awkward question; only the foolish ask twice.

Follow the Emperor, and the glory of victory shall be yours.

In our resolve we only reflect His purpose of will.

Obedience is the maker of armies.

For those who seek perfection there can be no rest on this side of the grave.

The burden of failure is the most terrible punishment of all.

To err is to invite retribution.

Life is not measured in years, but in the deeds of men.

To question is to doubt.

One man can start a landslide with the casting of a single pebble.

He who keeps silent consents.

Will is not enough. Act!

Submit to His will.

His will be done.

There will be no victory without your sacrifice.

If a job’s worth doing it’s worth dying for.

Labour long in His sight.

Serve the Emperor today, tomorrow you may be dead.

To fail in the service of the Emperor is the greatest of sins.

Obedience is not enough.

Your purpose is greatness.

To serve Him is to worship Him.

The loyal slave learns to love the lash.

Only in death does duty end.

Only the Emperor is all.

The cosmos cries out for salvation.

The man who has nothing can still have faith.

A small mind is easily filled with faith.

Power does not reside with the Oracle, but with the Priests.

Zeal is its own excuse.

Adamantium walls and plasteel bulkheads may seem formidable, but an unshakable faith in the Immortal Emperor of Man can overcome any barriers.

There is only the Emperor, and he is our shield and protector.

All souls cry out for salvation.

Faith is stronger than adamantium.

Be vigilant and strong. The Emperor knows what evil lurks in the vacillation of a weak fool.

Only the lost understand true terror

Blessed is a closed mind filled with faith.

Faith without deeds is worthless.

Without Him there is nothing.

Let faith protect your mind and metal your flesh.

The same hammer that shatters the glass, forges the steel.

Over the faithful, fear has no dominion.

Guns and warriors are useful, but it is our indomitable will that promises the ultimate victory.

Doubt forms the path to damnation.

He bears the weight of Mankind’s ills.

Faith is your shield.

The path of righteousness leads to the palace of wisdom.

His word is our strength.

If you believe you can win, you can win. Faith is necessary before any victory!

Blessed is the mind too small for doubt.

Courage is the mastery of fear, not the absence of it.

Cowards die many times, the brave die but once.

It is better for a man to be afraid than happy.

The fear of death is more to be dreaded than death itself.

A wise man does not fear, a man afraid does not think.

What is left when courage is lost?

Fear runs as deep as the mind allows.

Pain is an illusion caused by fear.

There is nothing to fear but failure.

An Eye for an Eye.

Be just and fear naught.

Ruthlessness is the kindness of the wise.

That was then, this is now.

There is no such thing as innocence, only degrees of guilt.

To be just, our law must be cruel.

Praise the Emperor! The Emperor's word is the Law, and the Arbites are the voice by which that word is spoken!

To stand upon the bedrock of the Law is our great duty. To presume to stand above it is our worst heresy.

Ignorance is a virtue.

Foolish are those who fear nothing, yet claim to know everything.

Be strong in your ignorance.

Educate men without faith and you but make them clever devils.

The difference between heresy and treachery is ignorance.

Brave are they who know everything yet fear nothing.

Facts are chains that bind perception and fetter truth. For a man can remake the world if he has a dream and no facts to cloud his mind.

The known is but the shadow of the knowable.

Ignorance is your best defense.

The common man if like a worm in the gut of a corpse, trapped inside of a prison of cold flesh, helpless and uncaring, unaware even of the inevitability of its own doom.

All our ignorances bring us closer to annihilation.

The truly wise are always afraid.

Wisdom is the beginning of fear.

Knowledge is power, guard it well.

Burn the Unclean with the fires of Purity.

The most deviant of mind is often concealed in an unblemished body.

Humanity is an ocean: if a few drops of the ocean are polluted, than the ocean is tainted.

A mind without purpose will wander in dark places.

Carry the Emperor’s will as your torch, with it destroy the shadows.

The Mutant bears his heresy on the outside, the Traitor hides it in his Soul.

Let the alien bow down before our sword.

Smite those that disbelieve, for they have turned from the light and are fallen.

The heretic shall reap as he has sown – the bitter harvest of vengeance and death.

My armour is contempt.

Cleanse yourself in the blood of our enemies.

Honour is what a pure mind knows about itself.

Light your way in the darkness with the pyres of burning heretics.

To withdraw in disgust is not cowardice.

Even though you once called him friend, the Traitor has forsaken you. Show no mercy even if he begs for it, for his soul is tainted and given the chance he will betray your trust.

The heretic and the blasphemer can offer no excuse for their crimes.

Better crippled in body than corrupt in mind.

Our mercies destroy us.

Only the insane have strength enough to prosper. Only those that prosper may truly judge what is sane.

Doubts rule the minds of the weak.

A small mind is a tidy mind.

Hatred is the Emperor’s greatest gift to humanity.

A suspicious mind is a healthy mind.

Happiness is a delusion of the weak.

An empty mind is a loyal mind.

It is not in my mind to ask questions that cannot be answered. That is the soul standing on the crossroad of vacillation. You search for wisdom, but achieve only a stasis of will.

The rewards of tolerance are treachery and betrayal.

An open mind is like a fortress with its gates unbarred and unguarded.

Success is measured in blood; yours or your enemy’s.

For every battle honour, a thousand heroes die alone, unsung and unremembered.

As our ranks advance, so does our devotion.

The weapon slays where the hand wills. Serve the Emperor!

Do not fear to use the biggest gun.

Speed the bolt that brings the end of enemy and friend.

Blessed are the Gun Makers.

The warrior who acts out of honour cannot fail. His death is honour itself.

Our enemies cannot stop us. They can only test our faith, strength and courage.

For a warrior the only crime is cowardice.

Inspiration grows from the barrel of a gun.

Words do not win wars. Deeds do.

Hatred is our surest weapon.

Conquer the galaxy. Do it not for yourself, but for the Emperor.

There is no arguing with the barrel of a gun.

On the battlefield, valour is the lifeblood of victory.

There are no walls strong enough to protect the enemies of Mankind.

Defeat is never an option!

Faith grows from the barrel of a gun.

Take with your weapons a valiant heart and the Emperor’s blessing.

Vengeance is your Sword. Hatred is your Shield. Loyalty is your Armour.

For the foes of mankind, the only mercy is the mercy of a swift death.

Weight the fist that strikes men down and salute the battle won.

Forward Brothers, with loyalty to victory and glory!

He who takes up the sword against us shall perish by it.

Place your trust in the Emperor’s steel.

The mightiest man may be felled by a single shot. Seek always to improve the odds.

To admit defeat is to blaspheme against the Emperor.

We are all but a weapon in the right hand of the Emperor.

Through the destruction of our enemies do we earn our salvation.

It is not the Horror of War that troubles me but the Unseen Horrors of Peace.

Consider not the future; the only thing that matters is the everlasting present.

Reach out to embrace the glories that will come.

We will not simply endure – we will prevail!

The future is trivia.

We must endure the present so that those that follow may continue our endeavours.

The greatest man is but a ripple on the surface of space.

Hope is the first step on the road to disappointment.

Praise the sun that brings the dawn of our final doom.

The worst is yet to come.