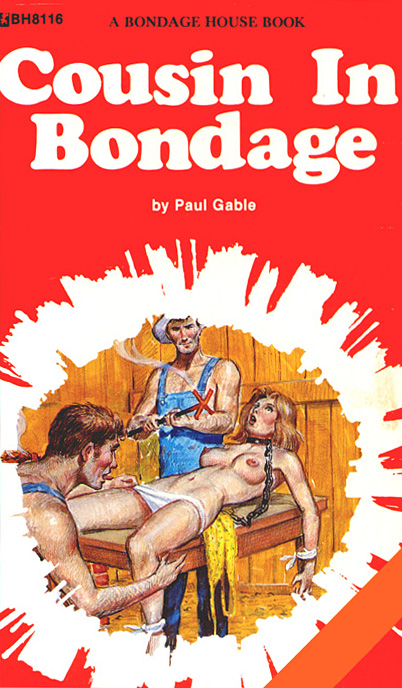 "Stop it! Take that thing away from me!"

Patty backed away from her cousin Jack, her eyes wide with terror. He was holding his stiff eight-inch cock in one hand. Black cock hairs bristled around the opened fly while his balls rested on the faded blue material of his halved Levi's. He was smiling savagely at her, his white teeth contrasting sharply against his black moustache. The teenaged blonde was trembling as she watched his fingers work slowly back and forth over the thickly-veined outer skin of his cock. He was lubing his cock down with the clear fluid oozing from his piss-slit.

"Come on, Patty, you need a good hot fuck with this mother," Jack snarled, his face contorted with lust.

Her voice sounded so small, lost in the barn that the two of them were in. Patty backed up a little more, her sandals slipping on the loose straw covering the dirt floor. The smell of stale piss hung in the thick, hot air like perfume. Her eyes darted about, searching for an escape. But the only way out was the big double door that was now locked shut behind her cousin.

"You came in here hopin' to find me, right, Patty? You didn't want to talk. You wanted to fuck. Well, you're gonna get it now," Jack said, his voice growing thick and raspy.

Patty felt her flesh crawl while at the same time her chest tightened. What she was feeling wasn't all unpleasurable. In fact, if the girl were completely honest with herself, there was a lot of pleasure in her sensations. For the past two weeks since she'd come to visit with her aunt and uncle out here in Oberlin, Ohio, Patty had been eyeing Jack, hoping he'd notice and at the same time praying that he wouldn't. Oh, he was so different from the guys at school who were always trying to get into her pants. So big, so muscular, so silent, and yet how his body radiated vitality, masculinity at every turn! It made her cunt grow all hot and mushy and swollen just to watch him working with his shirt off, his tanned flesh rippling with muscles as he drove the tractor. She watched as he got off and winked playfully at her.

"Come on, baby. Come on and take that fuckin' dress off. It's too hot to wear clothes in here," Jack said, his lips curling up in a sardonic smile.

It was hot. Patty felt sweat trickling down her back, making her clothes stick uncomfortably to her flesh. Still backing away, Patty crossed her arms protectively over her tits, digging her finger tips into her skin as Jack advanced. He wasn't going to touch her… he wasn't. No! She had to protect her cherry, to save her virginity for her husband. That's what her mother and father had always told her. Time and time again her parents insisted that only "bad" girls let men take advantage of them. Once they were "ruined", men would never take them seriously. In the days of the so-called sexual revolution, Patty Weatherford's parents could still convince their daughter that this was gospel truth no matter what her friends at school said. Protected, sheltered all her life, the pretty slim-hipped blonde believed her parents.