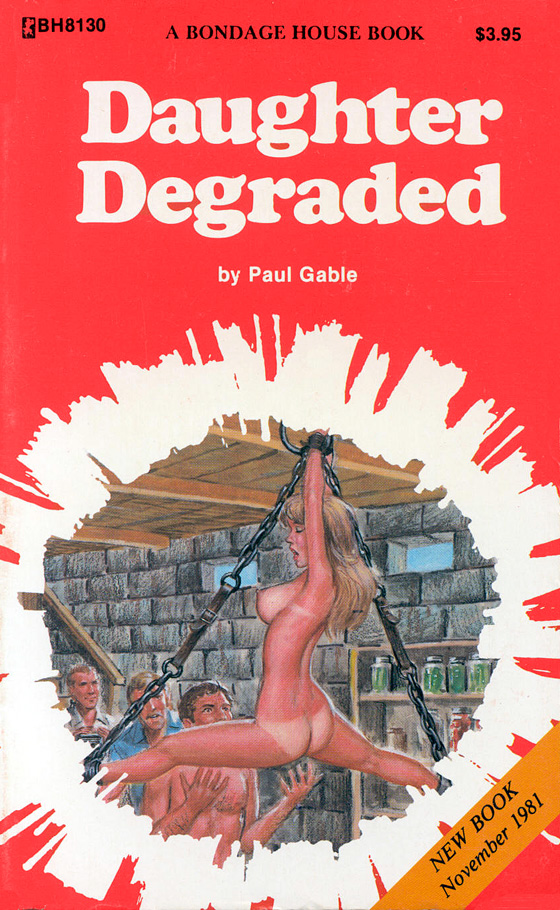 Cindy Williams leaned against the barred window, peering up through the dirty glass at the evening sky. It seemed so quiet, so peaceful. She could make out the Big Dipper just beyond the last iron bar. If only she could be outside, outside where she'd be free from those… those animals who had taken her!

Cindy closed her eyes, fighting back the tears. Clenching her fists and pressing them against her thighs, she remembered the horror of being kidnapped, of being dragged from the parking lot in front of the Lucky's Supermarket on Lincoln Avenue in Santa Monica. Hadn't anyone seen her, heard her cries as the three men shoved her inside and drove off? And then how they touched her, feeling her tits, shamelessly shoving their hands under her skirt, reaching for her pussy. It had been her panties that had saved her from being completely humiliated… that and the rough orders barked out by Jack, the driver.

Throughout the long trip up to this deserted house, Cindy tried to make them understand. Her mother was a widow. She had some money, but certainly not enough to merit a kidnapping! It was then she learned off-handedly that there were other girls here, girls like her who had been swept off the streets and taken up to this retreat for… for what?

Cindy sighed, turning away from the window. Once more the teenaged blonde began to pace in her room – ten feet wide, eleven feet long, and just enough head space for her to stand up in. There was the smell of stale beer and cigarette smoke in the room that made her wrinkle up her nose. When she had first been thrown in here, she had beat her fists against the door, the walls, hoping something in this rotting house would give way and she could escape.

But the walls were stronger than first they appeared. And they were up somewhere off the Angeles Crest Highway, away from any nearby homes where people might become suspicious and call police.

She sat down on the dirty wooden floor, holding her head in her hands. What did they want with her? None of them said anything after Jack had barked out his orders for them to leave her alone.

They had hustled her out of the car, pinning her arms behind her while nearly dragging her up the stairs and shoving her into the home. It was a large house, one of those three-story Victorian homes that wealthy rail barons used to build in the eighties and nineties. Cindy's room was downstairs somewhere.