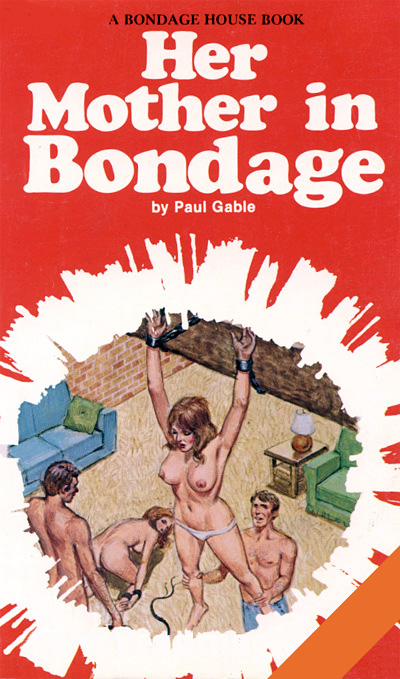 Her mother in bondage

Her mother in bondage

Marcie Williams stood in the small room, standing on tiptoe and peering out the window. She saw the fence – tall, strong, topped with barbed wire. It looked forbidding. The barbed wire made her flesh crawl. The teenager wiped a tear from her eye and looked at the gathering darkness. She'd been in this awful place for nearly a day now. In the distance she could hear dogs barking.

"Oh God!" Sobbing, Marcie turned from the window, hugging her body protectively, wondering what on earth was going to happen to her next. Kidnapped! The word made her gasp for breath. The girl closed her eyes and fought down the terror rising in her throat. No, she couldn't give in to these vague fears. She didn't even know what these men wanted. All she remembered was some pounding at the door. Her mother wasn't at home.

Marcie rubbed her palms briskly over her arms, feeling the goosepimples. What possibly could these men want of her? Her mother had no money, not really. Rhoda Williams, Marcie's mother, was a widow who worked as a registered nurse at St. John's Hospital in Santa Monica. Her pay was barely enough for them to get by on. When those two men burst into the house, threw some cloth over her head and dragged her out the back door, Marcie couldn't believe this was really happening. What on earth could they want?

The girl sighed, wondering what would be in store for her. Stories of what kidnappers did to their victims, especially if they were young and attractive, flashed through her mind. They were animals. They'd strike tomorrow, or possibly tonight. It was inevitable. Marcie became faint with terror.

Stretching out an arm, the girl supported herself, trying not to think of this insanity. The thought of her being taken by force to this out-of-the-way spot was almost hilarious. For a moment Marcie thought her kidnappers might be sex fiends, taking her just for pleasure. Rut then they would have raped her in a moment, violating her in the car.

Instead they had tossed her inside a smelly room, then locked the door without saying a word!

Marcie was a fully developed teenager with thirty-six-inch, high-riding tits, a waspish waist, long lithe legs, and a pretty face framed by long, blonde hair. Her full tits and ass made many a man turn his head. Plenty of boys at school had wanted to fuck her too. But, miraculously, Marcie had managed to keep her cherry intact, fending off anxious studs with their crawling hands. Several times in parked cars they had managed to get their hands up her dress to cop a feel. But that was their last date with her. No, Marcie wasn't going to wind up in a maternity dress just because some guy wanted to get off.

The frustration, anger and tenor brought about a change in her that she found strange. Surprisingly the girl discovered her pussy was becoming hot and tight. The more she thought about her captivity and the possible horrors it could entail, the more aroused her cunt became. Why? Why on earth should this imprisonment delight her in this odd way? Marcie closed her eyes, passing one hand over her burning forehead. It was so confusing.