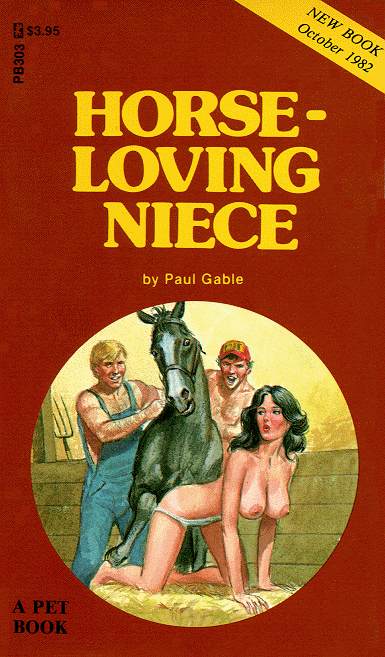 Linda Albright stood on the porch of her aunt's ranchhouse, staring at the reddening sun as it dropped slowly behind the mountains. The air was so clear here in the high desert. The sky so much bluer than in L.A., the landscape far more dramatic. Why couldn't she enjoy it? Why couldn't she simply lay back, run the ranch and enjoy the wild beauty of this countryside instead of thinking of that awful itchy heat concentrating in the furry bundle between her legs? She sighed, closing her eyes, feeling her strength being sapped away.

"I asked, if you want somethin' else."

Linda opened her eyes and pushed away from the wooden porch support she'd been resting against.

"No, no, Hank. That's enough for today. Tell the boys thanks for everything… for helping me out," Linda said, smiling at the tall dark-haired hand shuffling his feet in front of her with hat in hand.

It had been difficult at first, taking a leave of absence from her teaching job in Glendale to come out here and help her aunt after Uncle Jim had died. The ranch was so big, so complicated. Thank God they had a competent foreman and six good hands to do the actual work. It had been a slow, painful learning process for Linda. But being an intelligent young woman of twenty-four, she finally managed to learn some of the ropes of the game. And after the first month Linda began actually to enjoy living out here, working with the men, learning about the cattle business with all its problems and rewards. There were times when she even thought of leaving her teaching job altogether in Glendale and setting up shop here outside of Riverside.

But then she thought of the isolation here, of the temptations! All those men, all wanting to fuck her. Yes, they wanted her up against them, letting them squeeze their pricks through her cuntmeat. Linda read their eyes, could feel what they were thinking as she passed them by in her tight-fitting Levi's. They wanted her, but were afraid to do anything because she was the boss, the owner. That alone saved her from the crude remarks she was so used to getting back in Los Angeles. There were the off-color remarks, the groping in public busses, even obscene phone calls now and then in the middle of the night from men too cowardly to face her, telling her how they wanted to put their mouths on her pussy and suck her cunt until she went crazy. How she hated all that, wanted them to leave her alone.

And yet there was another part of her that relished all the attention, riveted her ear to the phone, made her nipples stand up and itch like mad when she felt those fingers sliding over her asscheeks in the bus. Her mother had done her job well, frightening Linda out of her wits at an early age about men… and especially about fucking. But some part of her had escaped those dreary moral lectures. Some part of her was waiting for the right moment to assert itself, to demand to be satisfied no matter what. Linda shivered, rubbing her upper arms with her finger tips. Hank was still standing in front of her, looking a little uneasy. Linda frowned, wiping her sweaty palms on her dress.