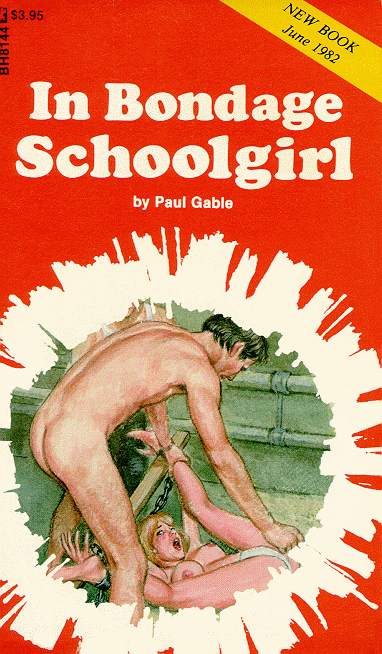 "Annie! What are you doing?"

Betty Rawlins sat at the lunch table, her face reddening. Glancing quickly across the crowded cafeteria, she spotted several of the boys staring in their direction, silly smiles twisting their faces. She knew why? She knew why they were laughing at her and her friend. Annie was sitting right there in public, sliding her mouth back and forth over a peeled banana.

"Stop it!" Betty hissed, her forehead wrinkling with disapproval.

"You said you wanted to see how to suck cock. See? You've gotta be careful not to leave any teeth marks on this. Same with a guy," the perky brunette said, handing her friend the peeled fruit.

Betty shrank away from her friend, wishing she could sink into the floor and die. Those looks the boys were flashing at them! She could feel their eyes burning through her clothing, warming her tits, making the rubbery tips stand up on end, and brush against her sweater itchily. And her pussy! How warm and wet and tight her cunt was getting as she sat there in the school cafeteria! It was wrong feeling this way! Her mother had told her time and time again that men wanted one thing only – to get between a girl's legs and fuck her. And, when they got what they wanted, they were off for another pussy. That was what had happened to her father. Or so she was told.

"I didn't think you'd do something like like that right here," Betty said, leaning over the table and stopping her friend from repeating the action.

"Huh? Oh, them," Annie said, turning around and seeing several boys grinning back at her. She let out a tired sigh and put the banana back down on the table. "They're just a bunch of creeps. They think they know everything. Well, they don't." Annie, shrugging her shoulders, turned back to her lunch.

"That? Oh, I guess some people think so. But Hank doesn't think so," Annie said confidentially, giggling nervously.

"You mean… you mean you and Hank? Ohhhhhhhh, Annie. I never would've thought…"