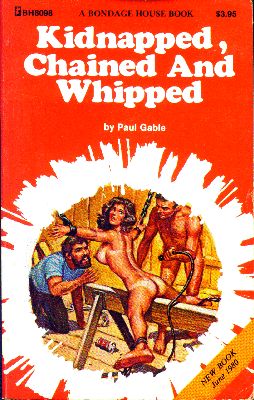 "Ohhhhhh, but somebody's gonna see us!"

"No way, Candy. I locked the door," Chuck whispered, sliding his fingers under the blonde's bikini bottoms. The eighteen-year-old shivered, pulling away from the gym instructor's strong arms. It was wrong doing something like this in such a public place. She should send him away, run for the women's locker room. Surely there'd be someone to help her.

But did she really want help? When his fingers were there, moving inches away from her cuntlips, snaking under the elastic leg band of her briefs, then how she wanted him to touch her there, to do things to her! How that tickling, burning itch made her cunt so very, very hot! When she moved away from the dark-haired instructor she felt the velvet inner surfaces of her pussy rub together and more hot juice seeped out, wetting down the crotch panel of her swimsuit. This was the worst it had been in a long time! Oh, what could she be thinking of? This was the third day on her new job, working as a Jazzcuzzi dance instructor at Reardon Health Spa. Everyone liked her and apparently, one person liked her a little too much.

"Please, I… I never did this before and I don't want to start here," the girl confessed, feeling ashamed by the confession she just blurted out. Chuck stopped his advance, leaning heavily against the counter of the men's workout room and studied her. The aroma of sweaty bodies still hung in the mirrored gymnasium. Overhead the fluorescent lights buzzed and in the background the Muzak droned.

"You're… a virgin?" he asked in disbelief, raising his eyebrows while suppressing a laugh. Candy didn't think there was anything funny about this at all. She'd come, into the men's workout room to look for a particular book on muscle structure, discovered Chuck there repairing one of the horizontal bench press machines and started talking with him. The next thing she knew he was on her, pawing her, backing her up into a wall while running his fingers over her body. And what was worse, the blonde teen found herself responding to his sexuality.

"Yes. And what's so funny about that?" the girl asked a little angrily, flushing red when Chuck turned his face and laughed into his fist.

"Man, I… I didn't know any of your kind was still around, especially here," he said, gaining control of himself once more.

"Ohhhhh!" Candy cried in frustration, stamping one foot and turning around to leave. She'd find the book later. Right now she was going to shut down the jacuzzi in the pool room and…

"Hey, don't go away mad. I'm sorry… I didn't know," Chuck said, taking her by one arm and pulling her back.

"What are you going to do?" the girl asked, trying to sound angry but feeling fear course through her veins. It was a fear based on what he might do to her, and on how she would respond to it. Suddenly, Candy was very unsure of her mind and body.