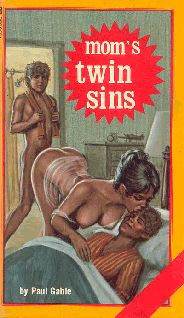 Sheila Kane walked briskly into the tiny bedroom on the second floor of her home. Moving quickly across the thickly carpeted floor, she threw open the heavy blue drapes. Sheila turned around and nervously brushed back her long blonde hair, smiling at the tall, black-haired man who had followed her up the stairs. She could sense that he was becoming more interested in her big tits and firm ass than he was in the room.

"It's not exactly the White House, but it is cheap," Sheila said, feeling torrents of hot blood fill, her spongy cuntlips in spite of every attempt to calm her snatch down. She almost groaned with delight as she felt her pussy membranes slowly stretch and throb.

Stop it! Sheila screamed to herself as she curled her fingers into her palms and dug her fingernails into her sweaty skin.

"Like I said, I don't need a palace – just some place where I can get away for a few hours a day," the stranger remarked offhandedly as he continued to stare at her swelling tits.

"Mister – ah," Sheila began, moving away from the bed and toward the doorway. She was fighting an almost overpowering urge to roll over on the mattress and toss her feet high in the air. Sheila could feel torrents of hot twat juice oozing through her bristling cunthairs as she tried to keep her legs from trembling so uncontrollably. But her body seemed to be spiraling out of control. Sheila felt her pussylips springing widely open then slamming shut as she pictured this man's cock growing and stiffening against his hot, hairy, powerful belly. These were thoughts she knew were improper for a woman with two teenaged sons to have.

"Yes, Mr. Anthony. You know, I've got two sons living here," she started. Sheila wanted to let him know that she wasn't taking him in just because she wanted stud service. She was a respectable woman whose ex-husband refused to make alimony payments and who had to take in boarders to keep the bill collectors from beating down her door.

"Really? Maybe my daughter can meet them sometime," Frank said, still grinning at her. Sheila felt her nipples scratching angrily against the stiffened cotton material of her bra. They seemed to be broiling in those big cups, and Sheila would have given anything to unbutton her sheer white blouse and unsnap that uncomfortable halter.

"Oh, then you're married?" Sheila said uncomfortably, wondering just what he needed the room for. She hoped he wasn't some kind of freako who was into whips and dead bodies or something.