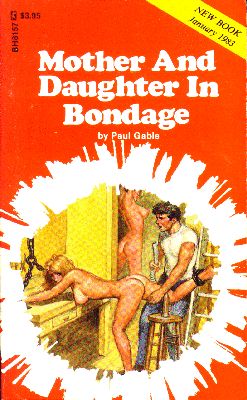 Mother and daughter in bondage

Mother and daughter in bondage

"Take this cock in your mouth, you dumb bitch, and suck hard. Do it, or I'll break your fuckin' neck!"

"I said get your lips down on it and blow, woman!"

The six-foot-two stud reached down from his kneeling position on the bed, and he curled his fingers in Janice Urban's long blonde hair, snagging it under his jagged nails. The attractive thirty-six-year-old woman cried out, her eyelids fluttering while her jaw slackened from the pain. He was yanking her up from the mattress, jerking her head up and shoving her face against his hairy groin.

Just six feet away, crouching in the soft, damp dirt beneath the window was Janice's teenaged daughter, Sharon. She knew something like this had been going on. She just knew it. Her mother had been acting strangely lately, disappearing certain nights, trying to get her out of the house on others. No, things just hadn't been the same lately, especially after the Harringtons had moved in next door three weeks ago.

And there her mother was now, crouched naked on the bed. Above the woman, his cock sticking straight out from between his thick muscled legs, was Mr. Hank Harrington. He looked so mean, yet so sexy with his long black hair hanging rakishly over one eye. How long had they been doing this horrible act? How long had they been… fucking?

"Oh, please, no… I never did this sort of thing," her mother begged, her blue eyes wide with horror as she stared at his ten-inch cunt splitter.

Sharon trembled, rubbing her fingers briskly over her upper arms as a soft breeze from the north rustled the leaves of the bushes surrounding her. She repositioned herself, feeling a cramp beginning in her calf as the girl pressed her nose against the window pane and watched her mother perform. It was like watching a person she had never met, never known. Rarely in her young life had Sharon thought of her mother as a sexual object. When her father died, Sharon depended more and more on her mother for guidance, feeling that life would just go on pretty much as it had without her father. How wrong she had been!