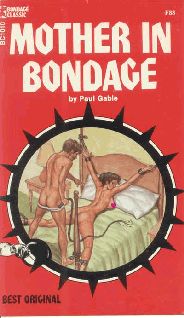 Glenda Williams reached up with her right hand and brushed several strands of her long, silky black hair away from her blue eyes. She held onto the long, brown leather reins with her left hand, guiding the powerful black horse around the hurdle count one more time.

"Let's go, boy," Glenda whispered in a low voice, bending over the homed saddle and brushing her full lips against the pointed tip of the horse's light ear. Slapping the animal hard across the muscular butt with her riding crop, Glenda dug her heels into his sides and spurred the horse forward a breakneck pace.

"Up! Up!" Glenda shouted as she wrapped bath her slender arms around the horse's neck and pressed her lithe body tightly against the animal's sweaty back. The first hurdle drew closer and closer as the pounding of the horse's hoofs rang in Glenda's ears.

"How'd you like to slip your cock into somethin' tight like that?" Sam Becker, the stablemaster asked his young teenaged assistant as the two of them leaned against a wooden fence and watched Glenda work out her horse.

"Ever seen a pair of tits on anyone like that? She's over thirty years old."

The boy flushed red at Sam's speech, turning away and pretending to be fixing the bridle that he held trembling in his fingers. He'd watched Glenda Williams and her eighteen-year-old daughter work the horse out before, and each time he fell more and more in love with them. He didn't know which one he preferred. The girl was fresh and bouncy, radiating innocence and wild excitement. But there was a sultry sensuousness about the mother. The way she walked, talked, moved gracefully about the grounds of the estate – she reeked of breeding, wealth, intense sexuality. Each had her own brand of attraction to offer. And each equally ignored Brad Graham. The frustrated boy was sure that neither woman really knew him except as that scruffy person who took the horse after they got through with it.

"Yes sir, slipping my big old dick into that old dame's cunt would feel mighty fine – mighty fine," Sam said, gluing his eyes on the woman's body as she and the horse cleared the hurdle and rushed headlong to take on the second one.

"Ohhhhh!" Glenda cried out as the two of them landed after clearing the second hurdle. One more to go. It was the highest one. Glenda reached back and whipped the animal's flank. The woman could feel the horses rippling muscles with her legs as she pressed them hard into his sides. It was strangely exciting.

"Go, damn you, go!" Glenda shouted as the horse raised his forelegs and pushed up with his powerful hindquarters.