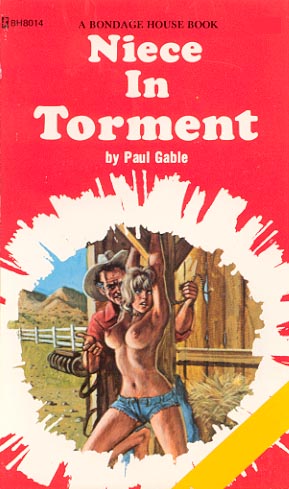 Faye Madden looked out the rain-streaked window of the droning 747 at the blurred city lights below. She clasped her trembling fingers together, folding them in her lap and trying to fight down the panic that made her heart pound like a trip-hammer.

"Weather making you a little nervous?" a ruggedly handsome dark-haired man who was sitting next to her asked.

Faye turned her head slightly to the right and shook it back and forth, afraid that she might choke if she said anything. Flying terrified her, and this storm was driving her wild with fear.

"Come on. Holding hands at times like these makes it easier," the broad-shouldered stud said, reaching over and gently covering Faye's folded hands with his big right paw.

"Th-thanks," Faye stammered, feeling her terror subside a little. At the same time, she felt her nipples press against the thin fabric of her white cotton blouse.

There goes that damned feeling again! Faye said to herself, closing her eyes and trying to ignore the fact that her cunt was slowly erecting itself, that her cuntal membranes were starting to stretch and swell, and that her pussy-lips were moving apart slowly, exposing her hot, trembling hole. All through the flight the dark-haired man had tried to make polite conversation with her. And she knew why. Faye knew that he wanted to sneak into her panties and slip his big fat dick in her snatch. That's the way all men were. All they cared about was climbing on top of a woman and crushing her titties with their big paws while they hunched their drooling cocks in further and harder until they got their rocks off. Her Uncle Fred taught her that ten years ago on her father's farm when she was fifteen and when he…

No! She wouldn't think about that anymore. That was a long time ago, and Faye was always telling herself that she'd recovered from that…

"Sure you're okay?" the big man asked.

Faye smiled weakly, then turned her head and looked out the window again.