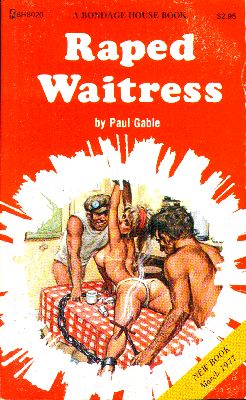 Linda Watson leaned wearily against the edge of the counter and looked up at the clock over the entrance to the diner. Three a.m. Only four more hours to go before her shift was over and she could go home. The firm-assed blonde inhaled deeply then sighed as she raised her right hand and brushed away a few strands of her long hair from her face. She hated working this night shift. She hated working in the diner. But how else could she support herself and her daughter, Judy?

"Hey angel tits, some more coffee!" a tall, unshaven, pot-bellied truck driver growled from the other end of the counter.

"Coming, coming," Linda sighed, pushing herself away from the counter and turning around to the coffee warmer. Linda hated the customers using that nickname. She cringed at the way they stared at her, mentally ripping off her short, clinging white cotton uniform and fucking her. The blonde hated everything about her present situation. But there was nothing she could do.

"Hey baby," the fat trucker moaned as Linda poured more of the dark black coffee into the chipped and cracked cup. "I've got my rig parked out behind, you know, out of the light. There's nobody in here," he said, looking nervously around his shoulder.

"Just what are you after?" Linda asked, putting the glass pot down on the counter and staring steadily into the big man's sparkling black eyes.

"Come on, babe," he said, moving his hand over the counter until it crawled over Linda's arm. She felt her skin goose-flesh with revulsion as the driver started stroking her wrist with his fat, stubby fingers. "You can give me a quick fuck and be back here before the boss knows it."

Linda's eyes opened wide, then narrowed as she moved the hot coffee pot quickly to the driver's hand and pressed its bottom down hard on his wrist.

"Ow!" the driver cried, jerking his hand back and shaking it wildly in the air.

"You filthy pig! You get out of here and never come back!" Linda snarled as she backed up and pressed her ass against the wall.

"You little bitch!" the drive wailed, sliding off the stool and backing toward the door as he still stared angrily at her. "You think you can get away with that? I'll get your for this!" ht growled menacingly as he spun around and stalked out of the diner.