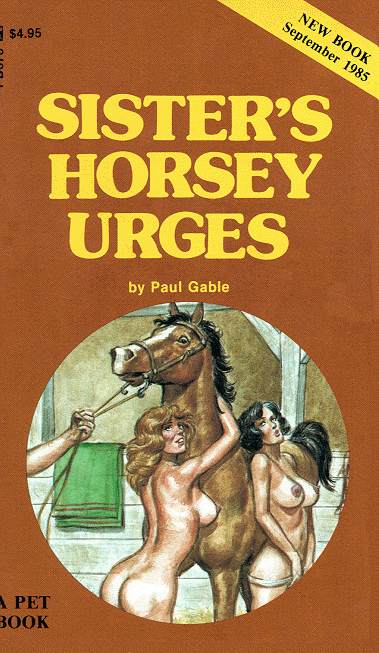 Jackie Granger stood behind the wing chair, nervously eyeing the clock above the fireplace, listening to the steady ticking that seemed to grow louder and more irritating with each passing second. It was difficult for her to be here, away from the familiar things of her house; here with her sister Evelyn, and Evelyn's two daughters and one son.

Evelyn had meant well, inviting Jackie up here to the high chaparral country after Jackie's marriage to Doug had fallen to pieces. Evelyn was trying to be a good sister, an understanding woman comforting the spurned wife. But little if anything could take away the terrible bitterness souring Jackie's life. And the loneliness!

Even here, Jackie felt deserted, isolated from even her close sister! How could she tell Evelyn that all this comfort bored and irritated her! Worse – it made the moist, crawly feeling in her heated cunt seem more itchy and overwhelming than ever!

Jackie curled her fingers into the green brocade material, her knees braced against the back of the chair, trembling against one another. It wouldn't be so awful if there were some reason for her horniness. But there it was, that sly feeling of sexual arousal, that throbbing itch that ached its way through her pussy, making her slick cunt-walls buckle now and then, while her clit began to rise slowly from the surrounding slick flesh. There was no way she could deal with this – not here, not in front of her sister and her nieces and nephews!

What was worse, Jackie thought, was that dog – that… that awful German Shepherd, slinking around the big, two-story, white wooden farmhouse, eyeing her, even touching her at times with his tongue. There was something in his stare, something in his eyes that made Jackie think he was laughing at her. It was silly, she knew.

But Jackie thought there were times when the dog showed more than a slight intelligence, especially when her sister, Evelyn, was looking the other way. That was when he touched her with his nose, rubbing it against the soft spots behind her knees, licking her ankles and bringing a hot, itchy rush to her pussy. Then she had to close her eyes and push away that sensation with what seemed to be a physical effort. It left her panting – panting nearly as heavily as the animal stalking her through the house.

Jackie shook her head, closing her knees together while squeezing her ass-cheeks. It was nice, very, very nice, to feel that subtle, slick rub of one cunt-lip against the other as she rocked her thighs back and forth. A hot dew dotted her cunt-hairs. Maybe she should have a drink. Some Scotch might take away the need to have something – something or someone – touching her pussy.

Doug! That was the one and only thing he was good for. Whatever he was, her ex-husband was a super-pistol in the sack, always fucking her, always satisfying her in the most exotic of ways. Even now, the tall, firm-titted blonde had to admit Doug was a master in the ways of fucking. It was just all the other things – the unemployment, the infidelity with her best friend's daughter, all the other lines – that finally drove her from his side.

Now she was fine, away from the turmoil of her bad marriage. Alone, and lusting after her sister's large black and white German Shepherd. The bitter irony of all this made Jackie set her teeth firmly against each other, drawing in a deep breath and wishing her newly adopted family would come back from the theater soon. At least, with people around, Jackie was relatively certain Bodego wouldn't try anything.