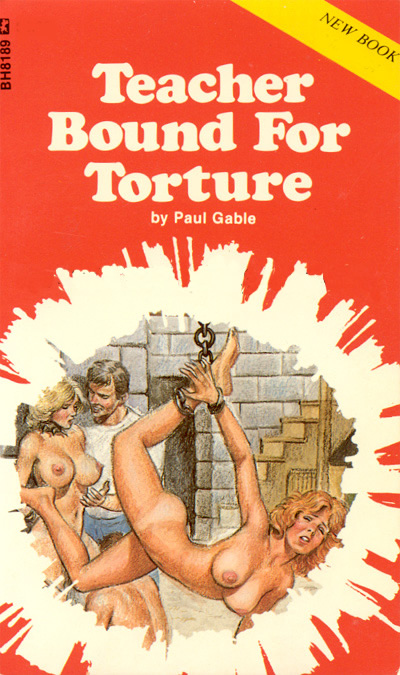 Susan Evans let her head fall back, her long blonde hair sweeping over her full, naked ass. How the rusty chain links chafed her wrists, rubbing back and forth against her flesh until the sobbing woman thought the iron would cut through to the bone! Tears blurred her vision while her heart skipped yet another beat. How horrid! How absolutely horrible this scene was. Never would she have thought that teaching high school could lead to this!

Again Susan tried adjusting her body, the pulling ache in her shoulders making comfort an impossibility. But the chains were unrelenting. Holding her body captive, stretched downward from the basement ceiling, the links continued to press harshly into her wrists, keeping her toes at least three inches from the cement floor.

"You don't look so all fuckin' high and mighty now, Miss Evans!" The harsh male voice mocked her.

Susan raised her head, shaking several stray strands of hair from her face. Standing there with a hellish grin was Jack Harrison, one of her senior teens. He had been nothing but trouble, she remembered, from the first day he'd strolled into her American History class late. But never would she have believed that he was capable of this.

"Yeah, hangin' around there all nice and naked, she sure don't look like she's gonna put us on report or nothin'. Too bad, some of the other guys can't see the bitch now," said Clint Jackson, Jack's buddy.

"She sure don't look like she's havin' a good time," Jack commented, scratching his chin.

"Yeah. Maybe there's somethin' we can do to help the slut out."

Susan shook her head, feeling sure something had popped in her shoulder. The muscles were pressing against her dampened flesh as she surveyed the two teens below her. They were sneering up at her, their handsome faces contorted with sadism and rage. Clint's black hair hung rakishly over one eye as he reached down and began unbuckling his black leather belt.

The woman drew in a sharp breath, feeling something like a tingle of excitement rush through her body. Jack saw the move and nodded approvingly, reaching down and cupping his fingers around his cock. Susan watched unblinkingly as both teens became aroused at her naked, hanging, helpless body. She folded one leg modestly over the other, trying to hide her cunt.

But she was helpless to hide herself just as she had been helpless when Jack and Clint had forced their way into her home. They had broken in through the bedroom window, jarring her from her early sleep, tearing the covers from her. How she had trembled naked in bed, clutching the top sheet, then feeling it torn from her. Clint – or was it Jack? – had had a knife, holding it pressed against her jugular vein. Sleep quickly fled her as she heard the teens telling her how they had had it with her discipline. Now, they said, they were going to teach her a lesson of their own.