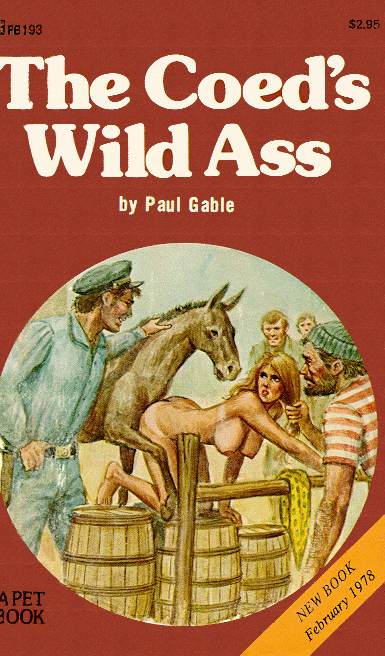 Lydia Merrick hurried along the uneven dirt path winding through the dense grove of elms. A warm breeze made the bright orange and red leaves rustle above the young blonde's head as she walked quickly toward the covered bridge. A good number of people still were wandering through Sturbridge Village even though it was only thirty minutes before closing time.

Shading her eyes with her hand, Lydia stopped some twenty feet from the bridge and scanned the moving throng of people for her friend Tina. She was so absorbed in the problem of finding her friend that Lydia was unaware of the lustful glances she was getting from many passing men.

"How'd you like to slip something hot into her?" one tall, fat dark-haired man said softly to his buddy as the two of them stood in front of the Mill Pond.

"Spread them legs apart, peel back them labes and start fuckin'," the other man said obscenely.

Lydia jerked with a start having heard the last few words. Only now was she aware of the two men standing close by. The young blonde dropped her hand and started walking toward the bridge. She couldn't deny that her silky flaxen hair tumbling over her slender shoulders, her soft blue eyes, her full pouting and sensuous lips and unblemished pink complexion were distractions for most males. But what was she to do? Splash acid on her face and eat Twinkies until she was stretch mark queen? Most men made their advances less crudely. But occasionally Lydia found herself contending with a Neanderthal as she was this time. The best defense, she had learned, from experience, was simply to ignore the comment and pass on by.

"Mmmm, hot pussy," the first man said sucking in his fat lower lip and biting down hard in frustration. His small black eyes glittered and danced like those of a hungry rat as Lydia brushed past the men and stepped onto the wood floor of the large covered bridge. She felt her skin crawl when she heard the first man moan. The blonde knew well what was on his mind.

I shouldn't have worn this sweater, Lydia thought to herself as she moved toward the middle of the darkened bridge. For the first time she was conscious of her full figure revealingly displayed by her outfit. The blonde's full, high-riding titties jiggled teasingly back and forth with every step she took. The hard, dark red nipples poked against the soft white cotton material, inviting stares from the curious and the lustful. Unconsciously Lydia knew she was displaying her womanhood, telling other women to beware of her alluring femininity, while advertising to all men her desperate physical needs and availability. Consciously, however, the story was something different.

Having recently turned twenty, Lydia Merrick was a junior at Amherst College in north central Massachusetts. Serious about her study of French medieval art, Lydia had little time for boys – or so she thought. She rarely went on dates, and even more rarely did she ever allow a boy to score a home run in her pussy. Although a child born in the sexual revolution, Lydia had managed her sexual experiences down.

Lydia felt her face flush hot with shame and indignation. Her slender fingers clenched the blonde stopped and wheeled around, her eyes flashing with outrage. But the two men had fled after shouting out the obscene insult. The few people around her either sniggered or looked the other way as Lydia continued standing in middle of the bridge.