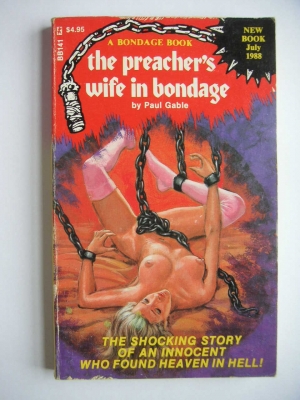 The preacher_s wife in bondage

The preacher_s wife in bondage

Ellen Weathersby sat quietly in the pew of her husband's church, her mind alive with the images of hell that her husband was expounding in front of her. "The pain, my children, the pain of a bee sting is magnified a thousand, no, one million times in hell. Think of it!"

She was, and her mind was alive with pictures that would have made her husband weak. Ellen moved her pert ass back against the stiff back of the pew, feeling every inch of her body alive with the forbidden lust her husband raved against. When he began talking once more of the ropes and gags the devils used, Ellen closed her eyes, pressing her knees tightly against one another, feeling her cunt grow hot and wet between her shivering white legs.

"God help me, God… God help me," she whispered, her moist lips moving slightly as her cuntal walls buckled under the increased sexual heat. Opening her eyes, she turned and saw several old women nodding approvingly at her haunted whisper. If they only knew what she really wanted! The thought of being naked and vulnerable while rough and rowdy men fucked her sent shivers racing up and down the blonde woman's tense thighs.

Ellen shifted her position uneasily on the wooden bench, tucking her legs under the pew and biting her pouty lower lip to regain some control over herself. It was wrong – dreadfully wrong – to have these thoughts drifting through her mind. She tried concentrating on the words thundering from her tall husband behind the pulpit. But all Ellen could think of was those big-cocked studs of her fantasies laughing at her, pointing at her as they pressed their boots against her face and ground her into the dirt.

Drawing a flowered handkerchief and pressing it to her trembling lips, Ellen quickly edged her way from the pew and walked briskly from the church. The rub of her swollen cuntlips against her clit made her knees shaky. It was a miracle, she thought as she inhaled the cool evening air, that she hadn't collapsed there in the doorway. Michael, her husband, still blasted away at the evils of the flesh – while Ellen could only crave them. Had he noticed her leaving? The attractive blonde clutched her black leather purse and shook her head, feeling the world closing in on her. No, she doubted he had seen her leave.

Ellen was feeling trapped as she hurried down the darkening road, her heels making sloshing sounds against the loose gravel. They were trapped out here among boring people whose lives were defined by the rotating crops and hellfire religion. It was more than she could take.

Walking more slowly now, Ellen began enjoying the feelings rushing through her thighs making them so tender while her cunt throbbed like an opened, festering wound. She was so wet down there. She could feel her panties clinging itchily to her swollen cunt-lips while more and more warm juice seeped from her cunt-hole and wet down her pussy-hairs. God in heaven! How was she supposed to live like this?

In a moment, the woman realized she was some distance from the old clapboard church. She was approaching a low, long house with a rusty tin roof that was sagging badly in the middle. She stopped, her breath catching while one hand fluttered up to her throat.