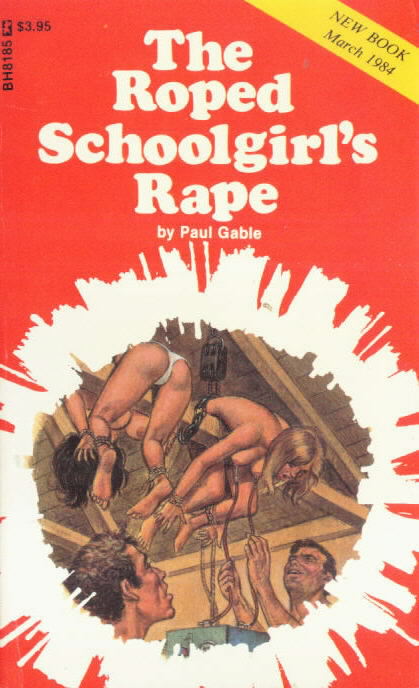 "Who is that creepy guy?" Ginny Williams bugged her notebook to her tits, feeling revulsion and a slight sexual thrill race through her body. She had stopped by her locker, pressing her rounded ass against the blue metal door. Her girlfriend, Cindy Frainingham, was fishing in the top shelf of her opened locker for her history book, muttering under her breath.

"Hm? Oh, him?" Cindy's voice dropped when her eyes flashed across an older man carelessly dressed in dirty coveralls and a khaki army-style shirt. He was rattling around a small cleaning closet, casting looks at several of the girls in the high school as they breezed by.

"He's unreal," Ginny said, feeling a giggle die in her throat the minute his gaze came to rest on her. There was something in that gleam, something that made her blood chill. Ginny tightened her fingers around the notebook, drawing her knees together under her plaid skirt and curling her toes against her sandals.

"Yeah," Cindy said breathlessly, slamming her locker door hard after having found that elusive history text. "He's new. I heard Mrs. Johnson complaining about him to one of the coaches yesterday, something about the way he kept on ogling the girls."

Cindy and Ginny giggled, moving away from the lockers and keeping a safe distance from the leering man.

"Anyway, he's the new janitor. I heard he's just out of jail or something."

"Wow! And they let him work here?"

Ginny turned around and glanced over her shoulder. The janitor was pulling another pail from the small closet. He glanced up and caught her eye again. Ginny thought she could see a leering smile begin to curl his thin lips. She shuddered again, turning and quickening her pace down the red-tiled hall.

"Sounds freaky, I know," Cindy agreed. "Probably there's nothing to the story. Come on. We're gonna be late for class."

Ginny hurried behind her best friend, quickly forgetting about her unpleasant encounter with the janitor back in the hall. The two girls had just rounded another corner when Ginny found herself colliding with Justin Hartman, captain of the football squad.