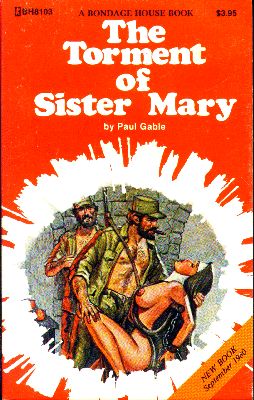 The torment of sister Mary

The torment of sister Mary

Sister Mary Theresa lay quietly in her small bed, her eyes fixed on the half-naked image of Christ on the cross in front of her. It's a terrible thing for me to feel like this, the young nun thought, closing her eyes and shivering with sexual excitement. She was a nun, a bride of Christ, a woman following the example of the Holy Virgin in renouncing the flesh.

But lately all Sister Mary Theresa could think of was her flesh – her body, and that strange electric shock that made her fuzzy cunt very hot and very, very moist!

"No," she whispered out loud, turning her head away from the crucifix and biting her lower lip. She couldn't give in to those feelings that took her mind off prayer and duty. "No," she repeated. But the feeling stayed. Her cunt was so hot! Every time she moved her plump, firm asscheeks from side to side on the bed she felt her pussy walls rubbing against one another, the slick folds and hollows shuddering with that impact.

Think of God, think of God and find peace, Sister Mary Theresa told herself. It was what Father O'Reilly told her last week when she went to confession and told him what she'd been feeling. Yes, think of God! It was easy enough for him to say. But how could she close her eyes and conjure an image of God up when her clit burned like a hot jewel, taking her breath away just as she was about to pray?

Instead, Sister Mary Theresa rolled her head back and opened her eyes. She saw once again the nearly naked image of Christ sagging on the cross. Against her will the young nun found herself staring at the crotch, wondering about…

What could she be doing? Even the vilest whore in the city wouldn't be contemplating thoughts like those about the Lord God! The confused woman shook the tears from her eyes, getting up from the bed and sliding her long white legs over the cotton top sheet. She had to get out of bed, away from those thoughts haunting her with a horrifying regularity lately.

"Cold shower," she whispered to herself, clinging temporarily to the doorway molding for support. Sister Mary Theresa rested her forehead against the cool wood, smiling weakly as she thought about the water. Her students had told stories about stepping into cold showers to hold down sexual tensions. How she reprimanded them for telling such filthy stories in her class! Even the school wits a house of God! Even the small office where she and three other young Dominican nuns helped certain political candidates was a house where no such filthy talk could be allowed.

And yet the nun found herself walking unsteadily down the long darkened corridor, gasping for breath, realizing the only hope for her sexual arousal was a cold shower.