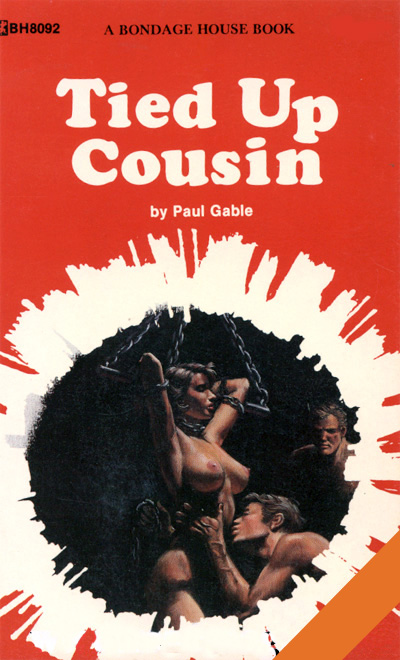 Carol Tyler sobbed, blinking away the tears as she pulled at the ropes chafing her wrists. This was obscene, perverted! Why had her cousin tied her up like this?

Draped over a sawhorse in her uncle's barn, the young woman found her wrists and ankles tied to the four roughly hewn legs of the device. The top connecting two-by-four pressed hard against her belly. Twisting her head around, the teenage blonde stared at her handsome cousin. He stood spread-legged some ten feet behind the saw, his shirt hanging loosely open against his broad chest while his Levi's were opened down to the third button.

Carol couldn't understand. She and her first cousin had been fooling around, touching one another and doing some light kissing. Certainly it wasn't anything more than she'd done back home in Los Angeles. Kissing someone as hunky and good-looking as Billy was an exciting act, especially out here in the high chaparral country. The smell of the hay, the clean air, the slight overhanging odor of animal urine – all of it seemed a kind of aphrodisiac to the young virgin.

And then all of a sudden, as if Billy had tripped out on some wild drug, he pinned her down, rolled her over as if she were some criminal, then held her there for a while calling her all sorts of dirty names. How her back and arms hurt as he pinned her to the floor with his knees, then dragged her like a common slut over the dirt floor to the sawhorse where he bound her tightly.

"You're all alike… all cunts, all alike, all wanna get a guy hot then shoot 'em down," the young man said, his voice quivering with anger.

Carol shivered. She'd never suspected her cousin was a psychopath. Blood rushed to her head, making her face flush and her brain spin. The cool air in the barn chilled her bare asscheeks. Billy had yanked down her sheer white cotton panties, bitching her dress up to her waist before finally binding her ankles to the sawhorse.

"I don't know what you're talking about," Carol cried, twisting her wrists. That movement only made the pain worse. Oh, God, this had to be a nightmare. Nothing in her life had prepared the young teenager for this. She looked at her cousin upside down. He was fumbling with his fly, stroking the fat bulge she'd noticed earlier this evening when he watched her watching the sunset on the porch. How handsome and romantic he looked to her then, standing against a tall oak, his thick muscled arms folded over his chest while he chewed on a weed and stared at her. A romance with her cousin. How that thought chilled the impressionable city girl to the bone. Of course, there wouldn't be anything too physical about what happened. It would be just like the stories in Seventeen… lots of kissing, lots of guilt mixed with happiness, then the final parting when she left her uncle's farm and went back to Los Angeles. But oh, how differently things turned out!

"No, sure you don't," Billy growled, finally unbuttoning his fly, then reaching around and puffing his thick black leather belt from the pant loops. Carol's eyes widened, watching the strip of animal bide hang loosely from his right hand. He flicked his wrists, making the belt dance across the floor toward her. "None of you fuckin' cunts know what I'm talkin' about. Well, you're gonna find out. You're gonna find out," he continued, spit flecking his lips, "find out you can't fuck with a… man!"

With that, Billy jerked his right arm back, snapping the belt over his head. Carol cried out, her body shivering with terror as she watched the leather arc in the air, snap in the middle, then slice down toward her buttocks. She closed her eyes, tensing her ass-muscles, waiting for the sharp jolt of pain that was bound to come.