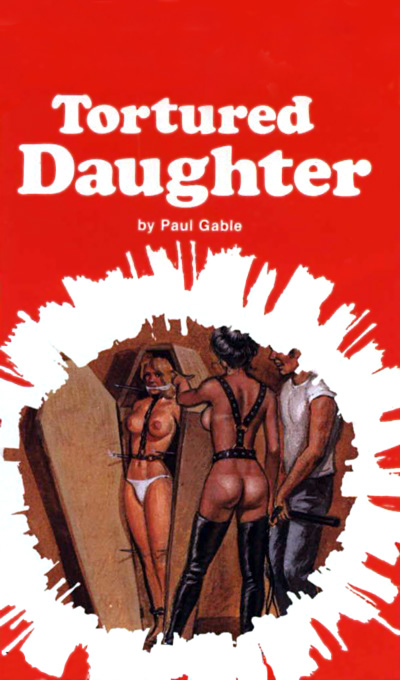 "We observe the strictest rules of discipline here, Cindy. You've been put here for a good reason by your parents. You were caught getting drunk once too often."

Cindy McArthur kept her crying blue eyes lowered to the tiled floor of the reception room. It was a lie. It was all such a terrible mistake. She wasn't an alcohol abuser like her mother kept screaming over and over the night she'd found some peach brandy in her bureau drawer. Her girlfriend, Judy, had had some problems with liquor and she was only holding the bottle from her until she could get rid of it.

"Are there any questions, Cindy?"

Dr. Alicia Endicott was tapping her well-manicured nails against the polished oak desk, tilting her head to one side. Cindy realized she was expected to say something. But what could she do? The teenaged blonde thought she would break into wild tears if she were to open her mouth. Her parents had brought her here to the sanatorium after they had heard such good things from Judy's parents about the place. Yes, her best friend had been incarcerated here for nearly one month now. And her parents had decided she would follow. It was so unfair, so unjust! Even their doctor had felt her parents were going overboard in their decision to send her to Hannah Manor.

Her voice was trembling and low as the room began to swim in front of her eyes. Crossing her legs at the ankles, Cindy dug her fingernails into her palms, fighting for courage, for some confidence in this terrifying nightmare that had suddenly invaded her life. Alcohol. She was no user, no alcoholic. And yet for trying to help a friend, she had been shunted off to this horrid place!

Raising her eyes, she looked once more at Dr. Endicott. The woman was tall, in her mid-thirties, with a head of fine silver hair pulled tightly back across her skull into a tight pinned bun behind. Her eyes were a strange tawny color, reminding Cindy of a cat's. Those eyes, how they seemed to look right through her. Cindy shivered, pressing her nails more firmly into her damp palms. The sound of a buzzer made Cindy nearly jump from her skin.

"Reaction from alcohol withdrawal," Alicia said, raising one eyebrow. "Well, that's to be expected. You won't find any babying here, Cindy. We all believe in developing discipline. That's the key." She raised a threatening finger and pointed it at the girl as if it were a knife. Cindy wished she could have sunk right through the bright blue carpeting under her feet. "We've taken the liberty to search your luggage, even though your parents assured us that they had gone through your belongings before you came here." Alicia patted her bunned hair. "Your things are in your room. An attendant will take you there. Of course, you'll be expected to adhere to our schedule. All our girls do."

Alicia's monologue was interrupted by the sound of the back door opening. Turning around, Cindy found herself face to face with a tall, stockily-built attendant dressed in white pants and coat. There was nothing particularly attractive about him. His small cold blue eyes, round pock-marked face and sensuous thick lips seemed to be in place with the forbidding nature of this place.

"You can take Miss McArthur to her room now. She needs time to get her things in order. We'll see you later, Cindy, to talk about our schedule here," Alicia said, her voice following the trembling girl out into the ball.

"This way," the attendant said, taking her roughly by the shoulder and directing her down the long, tiled corridor.