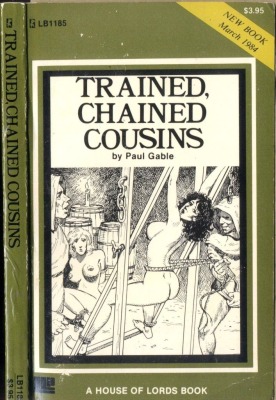 Abbey Williams pushed her long chestnut-colored hair from her face, smoothing her dampened palms on her dress. She had noticed more than four or five boys following her from the convenience store. The teenager hugged the brown paper sack to her tits, quickening her pace down the deserted country road. Abbey recognized two of the boys. Her cousin had warned her about them, calling them trouble-makers, when she first arrived for her three-week country vacation.

There were only two behind her now. Where had the others gone? Abbey felt her heart quickening as her sandals scuffed along the hard dirt road. She looked again over her narrow shoulder and walked more quickly. Just over the next hillock, she'd be able to see her Aunt Helen's small white clapboard house and she'd be safe.

There they were, the other three boys. They strolled out of the thick pine woods to her right and stepped onto the road. Abbey nearly crushed the milk carton in the sack. Al, the tallest and the oldest boy, came up to her slowly, his thumbs hooked in the front pockets of his faded Levi's.

"You and your cousin weren't so nice to us the other day," he said, wiping his nose with the back of one finger.

Abbey said nothing. He was smiling that crooked smile at her, making his long nose seem more ridiculous than it was. The big red ripe pimples on his face seemed to shine in the dimming light. He wasn't handsome by the longest shot, and the ugly stare he was giving her now made the pretty blonde teen shiver with revulsion.

"I… I didn't say anything," Abbey returned, trying to appear confident.

“Yeah," piped up a tall, red-headed boy. He moved up behind his buddy, grinning so widely his freckles seemed to narrow all over his face.

Abbey wrinkled her upturned nose, wishing he and the others would go away. She could hear his two friends coming up behind her. Surely someone would be driving by soon and spot this suspicious-looking group.