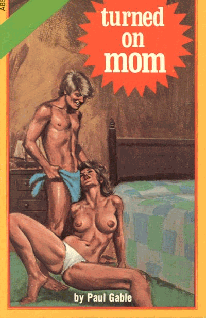 Anna Murray brushed back her long, fine blonde hair as she watched her husband Paul pull on his Navy officer's uniform.

"I don't know exactly, honey," Paul said as he tucked in his khaki shirt. "The C.O. said something about three weeks."

Three weeks! Anna moaned out loud and closed her eyes, picturing her husband's cock jerking wildly against her parted lips. She could see that powerful, throbbing vein that ran from the base of his mammoth prick to its swollen, pulsating head. Three weeks without Paul's dick! She didn't know if she'd be able to control the feelings that were beginning to grow in her toward her son Greg.

"Hey, it's not the end of the world, babe," her husband said softly as he sat down at the edge of the bed and ran his powerful fingers over her pendulous tits. "You think I'd go off and leave that pussy of yours if I didn't have to?"

"Hey, if you're worried about someone breaking in, Greg's going to be here all the time. Today's the last day of school, so he'll be around to protect you," Paul said as he leaned over and gave her juicy snatch a farewell kiss.

Greg… Oh, Greg! Anna thought to herself as she felt her cunt spasm crazily. She pictured her son-eighteen years old and every inch a man. His thick, wavy black hair curled across his wide forehead and behind his ears. Greg's body was like his father's-tapered like an hour-glass, muscular, and covered with a bushy, wiry matting of black body hair. And his cock.

"Ohhhh," Anna cried out involuntarily as she remembered the night she caught him jacking off in his bedroom. Both of them were too embarrassed to do or say anything for several seconds. During that time Anna stared lovingly at her son's hard, long prick as it twitched between his fingers. It was then that she first realized she wanted his prick stuffed inside her cunt.