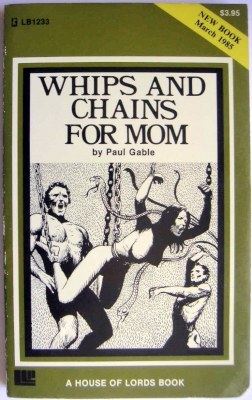 Whips and chains for mom

Whips and chains for mom

Joan Finney drew back, her slender fingers clutching at the top sheet of her bed. She stared at the large man in front of her. Her worst fears had been realized! While at home alone, she had been surprised by this man, an intruder who had rousted her from sleep. He was standing there at the foot of the bed now, one booted leg on the coverlet. He was pointing to his foot, a leer on his darkly handsome face. Joan shook her head, her long blonde hair washing across her face as she stared with disbelief at the big stud.

"You hard of hearin', lady? I said get the fuck outta bed and lick them boots!"

He was leering at her, his gray eyes staring at her full tits ballooning out around the lace bodice of her dressing gown.

Aware of this, Joan pulled the covers up a little higher, cringing down on the bed, her ass tensing while a strange tingle rushed up and down her thighs. She looked at the phone, wondering how she could get to it and call the police.

The big man followed her eyes with his, stretching one hand out and tearing the phone from the nightstand. Joan let out a sharp cry, tightening her fingers around the silken edges of the coverlet. He was tearing the cord from the wall, the sound of the wires ripping loud in the small bedroom. The next moment she felt the sheets slipping from her grasp as he tore them off the bed.

"Don't… hurt me," Joan stammered, her fingers fluttering around her tits. She felt the air making her nipples stand on end, spires poking up against the soft white material of her gown.

"Man, you got nice tits. And you're gettin' hot for me too, huh? I can see them nips gettin' real hard and stiff already."