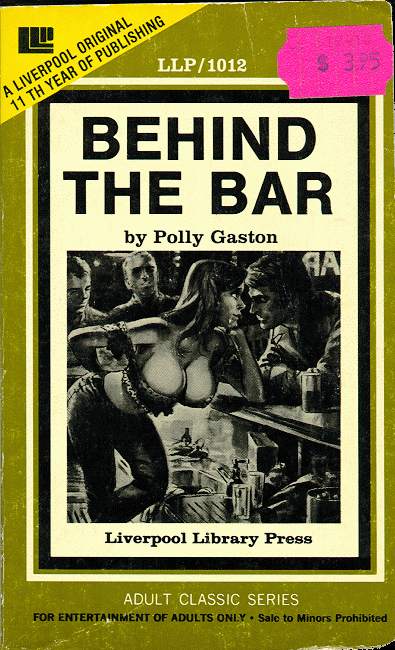 "Hey Brandy! There's no action in here. Let's go back to the office and knock off a piece!"

Brandy pushed her long blonde hair back from her forehead and stared at her bartender, Dave Billings. She was getting fed up with his lewd comments every time she came down to the bar. He was right about one thing, though. There certainly wasn't any action in the BRANDYWINE this afternoon. The bar was completely deserted. She hadn't done a thing to help the business since Buddy left. He was in Atlanta, taking a two week course in running a small business, and she was beginning to think that the bar would go broke before he got back and put what he'd learned into practice.

"You wouldn't know what to do if I took you up on it," Brandy retorted, staring straight into Dave's blue eyes. She had half a notion to say yes just to see what her loudmouth bartender would do. The truth of the matter was that Brandy was beginning to go a little crazy without any fucking. Fucking with Buddy wasn't all that hot but it was better than nothing. And just this morning she'd awakened with the sheet twisted between her thighs and her hand on her fluffy blonde pussymound. She was dying to be fucked and couldn't hold out much longer. Buddy had been gone a week and she was going crazy, longing for his huge, hot cock.

Brandy glared at him angrily and then she felt her lips turn up in a smile. He was right and it was true that Buddy'd never find out. Maybe she ought to give the kid a whirl and see if he was as good as he said.

"You're on, hotshot!" Brandy replied, still grinning. "There's nothing else to do here anyway. Put a note on the door and come on back to the office. I'm going to find out if you're all talk and no action."

Dave put the note on the door and locked it quickly. He'd been angling for something like this ever since Buddy left and now he was going to get it. He could hardly wait to see if Brandy was as sexy as she looked. He felt his prick harden in the front of his pants as he hurried to the back room and opened the door. What he saw made him freeze motionless, all except his cock, which jerked with wild lust.

Brandy was lying naked on the couch in the office, her body sprawled comfortably and her legs spread. One hand was resting on her swelling breasts, her fingers clenched around one full rosy nipple. Brandy's other hand was buried between her legs and as Dave watched she withdrew her fingers, shiny with her heated cream and gave him a sexy smile.

"You took so long I had to start without you," Brandy smiled, her voice low and husky. Then her face spread in an even wider smile as she noticed that Dave was frozen to the spot and his cock jerking and hardening in response to her lusty nakedness.