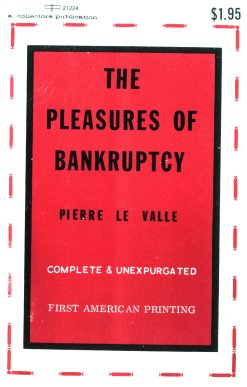 The Pleasures of Bankruptcy

The Pleasures of Bankruptcy

“You can easily see for yourself how I am situated, Mr. Freeman! I am perfectly solvent-if I could only collect the money owing to me. Business is bad just now, of course but it always has this time of year and I would really have no good reason for any complaint if only I could obtain what is due to me-for the lovely gowns and fine lingerie that I sell… to cover the beautiful, soft bodies of women and girls who never seem to give me or their overdue bills the least thought.”

“Yes-to be sure… I understand that well enough.”

The graying, heavy set man who sat beside Mrs. Rose Bolton at her office desk moistened his lips unconsciously and stirred vaguely in his chair as he listened to her final sentences.

“Certainly,” he said — in a tone which caused Mrs. Bolton to raise her shapely, well poised head and glance at him in an enquiring manner. “Of course… lovely-feminine bodies must have rich, beautiful coverings-but not at the expense of a person like yourself, who is struggling to make a living by providing all this… er… underwear and all that.”

“It never before struck me, Mrs. Bolton-but I suppose that the lingerie, panties, chemises, etc, are a far from negligible part of your business. I see these marvelous gowns in your showrooms, but I had not considered that these more intimate garments are also a specialty of the shop also-eh?”

Even though Mrs. Bolton had noted an unusual inflection in the voice of her wealthy landlord as he referred to these articles of apparel usually hidden from view, the words in themselves had no particular reason to shock a woman who was in the business of selling these things daily. So her attractive coloring was not heightened by even a shade as she nodded assent with a smile.

“Oh, yes…” she assured him. “We create gossamer thin garments of all kinds of — clothing the young aristocracy from the skin out… and it is amazing as well at very annoying to find how many of them are either reluctant or unable to pay their bills. It is as a result of this that I find myself compelled to postpone paying you the rent which has been long overdue. I have already explained to your agent… but perhaps you would care to look at my books and see for yourself exactly how I stand at the present time?”

Mr. Freeman bent above the volumes she laid open on the desk before him-but it was with unseeing eyes that he regarded them. He seemed oddly indisposed to abandon the… to her… unimportant topic she had launched.

“You-you build these undergarments right upon the bodies… which are to wear them?” he queried. “They are tried on-fitted to their wearers-just as you do with gowns and such things? These rooms of yours must have seen some delicious sights, Mrs. Bolton.”

The pretty woman looked up at him once more, somewhat startled by his tone. She noted the Bush of color in his face and saw that his gray eyes were turned down- apparently to her lap-although the books to be thus examined were upon the desk.