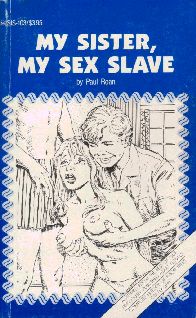 Norma was sure that letting Lily come to live with her was going to be a source of trouble. And, after the thirteen-year-old moved in, Norma found she was jealous of her younger sister's beauty and superb body.

Norma knew she was taking on a very real responsibility in letting Lily stay with her, but she had little choice. They were all alone in the world; two very young and lovely girls who would have to make a new life for themselves. Norma knew that she should be sad and mourn their mother but she could not do it. Their mother had tried to raise her young daughters but she had not been very good at things. There were always drunken boyfriends around, eager to get at the sisters; and when Norma could stand no more, she had run away. Lily had found her through the telephone.

Now Lily was going to live with her, Norma was dismayed, frightened, too. She was too young to have the responsibility of helping a thirteen-year-old bombshell finish growing up.

Norma Walton stood in front of her bathroom mirror on a sunny Saturday morning and looked carefully at the beautiful young reflection that stared back at her. She knew she was exceptionally pretty; she heard that all the time. She was a shapely blonde with a slow, sexy smile and a fabulous body-yet she was utterly useless to any male who might find her attractive.

She was the proverbial ice maiden; lovely, vblrant thing of great beauty and little or no warmth. There were many handsome young men who worked in the same office with her but they pretty much left her alone. Once in a while one of the new ones would give her the rush act and ask her for a date and she would turn him down and that would be that. And she would return to her cute little home night after night and find pleasure in movies on television.

She slipped her old robe off and stood in front of the full length glass on the bathroom door and was suddenly filled with a brand new surge of pride. She turned so that she could examine the contours of breast and bottom and she was so proud of the firm, jutting breasts that bristled with young beauty on her ribcage, the sweetly

sculptured buttocks, the virginal thighs. Her nipples were tiny, tinted a blushing hot pink and the rosettes were small, too. But, she supposed there was reason for that.

Her personnel card at the office said that she was nineteen but she was actually not quite sixteen and she was always glad that her face and figure had made her seem much older. She had done a great deal of planning and scheming when she was still living with her mother and Lily in the cruddy city apartment and she knew that she would have to run away because of the way things began to develop.

Her mother got to a stage where she could not control the men she brought home after she got a few drinks into her. Norma would never forget the night her mother's boyfriend, Leo, had wandered into her bedroom. Remembering, she began to blush and she watched her body turn a deep shade of pink. The mirror was reflecting the image of her too pink person and she wished that she could smile at herself, but she could not.