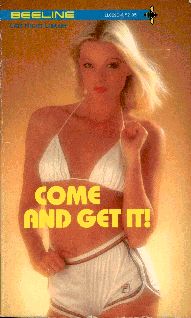 Come and get it!

Come and get it!

The bedroom was, chilly, and Doug Barstow shivered as he stretched his hand out and flipped off the overhead light. A yawn made him shudder again as the room plunged into a deep, complete darkness. As he hurried for the bed across the cold floor, rubbing his naked arms, he hoped Val wouldn't be in the mood tonight. His wife took it very personally whenever he couldn't get it on, no matter what his reasons were. He didn't think he could face another fight. So far it had been a thoroughly miserable day; his body ached with tension. He sighed with relief as he dropped into the warm bed, pulling the covers up around him. All he wanted to do was sleep.

The instant he lay down was like pure ecstasy: he could almost feel his spine melting into the mattress. It was as if his tensions had turned to liquid, and were flowing out of him, causing his entire body to tingle with pleasure. The bed was soft, yet firm, buoying him up, caressing him with tiny fingers of pressure. He stretched and turned, letting the luxurious feeling fill up inside of him. In his imagination, he felt as if he were floating on a soft, warm sea, weightless, relaxed, drifting off…

"You'll never guess what Monica told me today," Val said. Her voice had a nervous titter in it.

"Don't you want to hear what Monica said to me?"

"Can it wait until morning?"

Valerie, who had been lying on her back, turned abruptly onto her side, facing away from her husband. She curled her pillow in half under her head of long brown hair. From the suddenness of the move, and the stiffness of her body, Doug knew he had offended her.