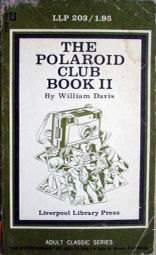 Cindy had gone to the bathroom, but the tremendous, biting sensations which gripped her hungrily tingling body weren't relieved. If anything, in the privacy of the bathroom she was able to go over in her mind the set of photos, and their remembrance only inflamed her trembling loins all the more. She was being consumed by the alcohol and lust, slowly, slowly – and she wanted her husband, wanted his throbbing penis buried to its hilt in her teasingly convulsing pussy. Her cunt spasmed as though it was already in the throes of orgasm, and as she walked unsteadily out of the bathroom and started back to the living room, she knew that she couldn't go in there, go in and just sit down and act normal. No, she had to have Howard NOW!

She quickly crossed to the bedroom where Howard had placed their overnight bag, and shedding her clothes, she was soon wearing a long, filmy nightie, her blond hair cascading down her back. She stripped the covers back and lay down on the bed without even a sheet to cover her and waited for her husband.

When he didn't appear within a few minutes, she called out for him, and she heard him walk toward the room. When he opened the door, she said drunkenly; "Quick! Close it, Howie."

"Cindy…" he said, again captivated by the sight of his tender young wife spread out waiting for him. "Cindy, I want you…" He all but slammed the door, and then he came to the bed, on which she had stopped lying and had now risen into a kneeling position.

"I want you to fuck me…" she breathed, unbuckling his pants. "Fuck me, Howie, fuck me…"

"What?" He could hardly believe his ears! "Did you say what I thought you said?"

"Yes, Howie!" she slurred as her hand lowered his pants until they pooled down around his shoes. She moved to the waistband of his shorts, sliding under it. She felt the soft tendrils of his curly pubic hair and the touch of his skin sent ripples of sheer lust surging through her. Her hand went still lower, contacting the head of his prick and she ran a fingernail over it. Blood pounded through Howard's loins, causing his cock to leap into erection and palpitate excitedly under her careres.

"Howie…" she moaned, pulling his underpants down. She was abandoning herself to lust, to the newly awakened fires within her; and she finally realized that she could admit her enjoyment, her arousal from the pictures without shame. "Howie, don't you want to fuck me?"

"Yes! Christ, yes!" All thought of his boss and his plans for the night were lost now as Howard began to squirm his hips. She stroked his cock and testicles, her fingers burning. He could barely contain himself to take the time to remove his clothes, and then he leapt naked on the bed to embrace his wildly hot wife. He entwined his fingers in her hair and jerked her head up, grinding his mouth down on hers, and her tongue flashed into his mouth like a purveyor of molten fire. His hand went to her nightie, feeling her trembling body through the thin material.

"Make me naked," she whispered against his mouth. "Rip my gown off, Howie, and make me naked!"