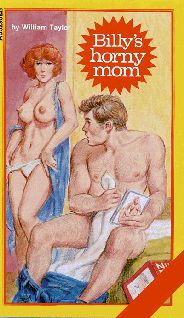 Linda's innocent eyes were bulging in her pixie face as her big brother rested his forearms on the backs of her bare thighs and stared closely at her jiggling ass. She'd never felt so humiliated, so helpless! She was sorry now that she'd teased him so much, but how could she have guessed he'd rip her clothes off and wrestle her to the floor?

She was pinned by his weight resting on her thighs and blushed hotly when she felt his warm breath on her bare behind. Mark ran his palms over the quivering fullness of his sister's big buns, then shoved a finger up her asshole.

"Yahhhh!" Linda screamed as her raw, pink bunghole was suddenly forced apart. She sobbed as the burning digit moved quickly back and forth, turning her wrinkled asshole in and out with painful regularity.

"Take it easy." Mark grinned. "It won't hurt for long. Relax and you'll like it."

Like it? Linda thought. How could anyone like such a dirty thing as this? She sobbed and moaned and tried to clamp her hole shut, but the ring was weakened now and wet, and a prickly heat was building from his frictioning.

"Ohhh, no!" Linda gasped, horrified by her body's betrayal. Her cunt was creaming, and her erect clit was poking its head into the carpet. "Don't, Mark! Stop, please! I won't tell, honest!"

"No way," Mark laughed. Having his sister's sexy body stretched out under his face like this was giving him the biggest hard-on in his life. Shit, he'd fucked a lot of teenagers, but always in their wet pussies, never in the ass. And now he had Linda's round, quaking ass loving his finger, hunching up to meet his lewd goosing.

"I've got you where I want you, now!" he gloated, and pulled his finger free without warning.

"Uhh!" Linda grunted. She felt her asshole snap shut and tingle. It itched and burned pleasantly, but she'd never admit such a thing to Mark.