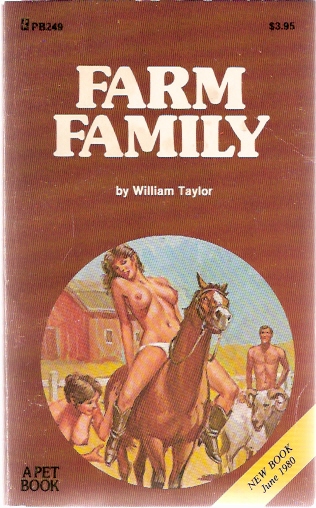 The heavy snowfall obscured the rays or the rising sun and muffled the wailing siren at the state prison. The sudden storm had knocked down the power lines and made all roads impassable. County workers had no way of reaching, let alone driving, their plows and cinder trucks, for the snow was now more than three feet deep and drifting across the roads and into the valley.

The driving wind also quickly obliterated the footprints leading to the isolated farmhouse. Years earlier, Dan Cover had fucked his first woman there and he had never forgotten the experience.

Now in the early morning hours, Cover, his grizzled head bowed before the storm, plodded from the woods, forcing his way through the freezing snow toward the only shelter he could recall. Finally, in the distance, he saw the farmhouse jutting like a dark iceberg in a sea of swirling whiteness. His full lips drew back in a humorless smile, and his lustful appetite, never fully appeased, raced to the fore and caused his large cock to bloat and tent the front of his thin, icy-stiff slacks. He felt the wild desire coursing through his cold body, almost intoxicating in its strength. Even in the midst of the blizzard his balls tightened with anticipation as he plunged joyously ahead, breaking the crusting snow and grunting and panting with nervous anticipation.

Damn, she thought, Jack won't make it home through this storm. Well, it's not the end of the world. There'd been many mornings she'd awakened with a wet pussy and no company. Fingers weren't so bad once in a while. It was only when there was never anything else that she suffered. Beth recalled the years before her marriage when, as a good girl she'd kept the boys from her and played with her pussy half the night.

Holding her breath, she trailed a hand down to her curly-haired cunt. Cupping it tightly she felt its warmth and wetness and squeezed her spongy pussy. Hot cunt juice oozed from between her fingers and she bit her lips.

Still grunting and squirming she slid two fingers into her flowing cunt, twisting them slowly and gently as her thumb nudged the stiff knob of her clit. Her hips circled as her clit lifted and strained away from its fleshy hood.