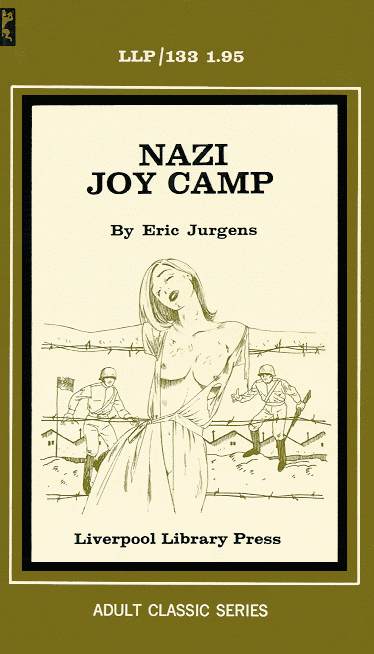 Ruth lay crumpled on the narrow planking and cried until it felt as though her heart would break. Her whole young body shivered and convulsed with the pain that throbbed throughout her. The semen of the young war lords of Hitler's Third Reich oozed from between her bruised thighs and from the corners of her full, aching lips. Her emotions were spent and her soul bruised. She wanted to hate but that would require too much from her. She simply lay as still as possible and let the pain and shame slowly drain from her body. She could not help but think, however, of all the horrible and obscene things she had been so suddenly subjected too.

Ruth was sixteen years old. She had been arrested and catalogued and interned in the oldest prison in Vienna when she returned there upon her father's supposed summons. She had been a happy, dreamy little school girl in Switzerland unable to believe all the nonsense that was said about her country, Germany, until now. Even the events since her arrest and detention were as nothing compared to what she had been through this very morning.

Ruth had been awakened at five o'clock. The woman in charge of her section, Frau Moelar, a huge woman who weighed close to 300 pounds and didn't appear to be fat, said, "Up! Los, los. It is your day. You must prepare yourself."

Ruth had been directed to the cold water shower and then had been made to rub her body until it string from roughness of the heavy towel. Her hair had been cut short the first week she had entered the prison and therefore required little care from her. She just dried it and ran a comb through it. She was given a heavy gown to cover her young body and was then led to a long plank table and directed to eat. There wasn't a great deal for her to eat. She had been famished but the Frau Moelar had told her that she would be sufficiently nourished with the juice and hot weak tea that was ready for her. She devoured it, then hugged her arms around her body to keep warm.

Ruth had waited one hour. Then Frau Moelar had taken her arm and led her down the corridor to the whitest, most sterile looking room she had ever seen. It looked just like a hospital room, an operating room, which indeed it was. She was made to sit on a cold metal bench with four other girls, all about her age, all dressed as she was, and wait. Shortly a nurse entered and greeted them in a cheery voice and injected each of them with kind of serum, using an extra long needle, on the upper arm.

Ruth was the second girl on the bench. That is, there was one girl, with raven black hair, sitting to the left of her, then three others on her right. She looked at the table in the center of the room and tried to figure out just bow it would be used and just what was to happen to all of them. Her body grew numb from the injection as she sat with the rest of the girls and did not speak one word since she had been warned not to.

Ruth had been sitting on the bench for one-half hour when a doctor entered through the gleaming white door. The lights were turned on over the table and the doctor, Herr Direktor of the entire experiment, entered the room with a flock of nurses behind him. He approached the five nubile girls and greeted each of them in turn and rubbed his hands and smiled and said: "You have been spared. If this experiment works – if you can learn easily – then perhaps you have a long joyous life ahead of you. If not, I cannot promise you anything. No. It is up to you girls. Follow the instructions that I give you and do your best." He turned to the nurses and told them that they could summon the young men.

Ruth's spirits lifted when the young men entered. There were four of them and they were handsome beyond description. She had been a very romantic girl at school, daydreaming of the time when a young man would enter her life and take her for long walks through the forests and kiss her and love her for all time. Her childish fantasies had never entertained what was to take place shortly before her.

The Direktor summoned the girl on her left, whose name turned out to be Beth, to the white table. She was made to take her robe off and get onto the table on her back. Ruth looked at the beauty of the girl, at her short black hair and her white skin, and felt a pang of jealousy because Beth was to be the first. She had large green eyes, through which she innocently looked at the world without the faintest hint of the madness that was about to take place upon her body. Her not yet fully formed breasts jutted out smartly from her body and the soft pinkness of her nipples contrasted sharply with the rest of her. Her flat muscled stomach was smooth and ended with her new growth of pubic hair that was black, soft and downy; it formed a perfect vee between her long white legs.

Once on her back on the table she was made to fit her feet into stirrup cups and her hands were strapped alongside her body. Ruth could see her shiver; and, looking at the four young men standing near the table she noticed that their eyes were gleaming in a strange anticipation as they took in the whole of the beautiful young female form spread out before them. The Direktor spoke to the young men, ignoring the girl on the table, then moved to her and told the nurse to move the table back.