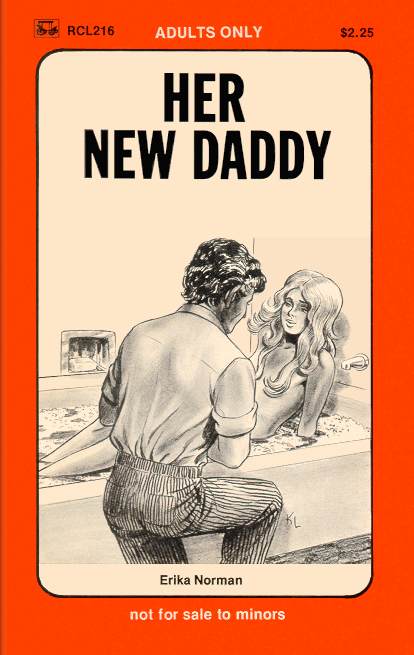 On her wedding day Brenda stood looking at herself in the mirror. Too bad I can't wear white, she thought. At the moment she was wearing nothing at all. Later there would be a fashionable blue suit, but now she wanted to examine her body, to see what her fiance, Hal Davis, would see later on.

She was a tall girl, five-feet-eight, and superbly built. She didn't have to convince herself of that. The whistles and stares she always got on the streets were evidence enough. If she needed more proof, it was there before her eyes.

The full-length mirror showed her long shapely legs, her gently rounded hips and butt, her tiny waist, and a firm jutting pair of 40-D tits. Brenda ran her hands up and down her body, feeling the silky skin, touching the little light brown nipples of her large pointed breasts.

She was satisfied. There were no wrinkles or blemishes anywhere. Even her small dainty mons was attractive, a little triangle of tight brown curls. For a woman of thirty, she was in excellent shape.

She tossed her long gleaming brown hair and studied her face – dark slanting eyes with heavy natural lashes, turned-up nose, full sensual mouth. She smiled contentedly. No one would guess she was thirty or that she was the mother of a teenage girl.

She figured Hal Davis would not be disappointed. She certainly hoped not. She'd been waiting a long time, ten years, for a good husband and a good stepfather for Debby. This marriage just had to work out…

Brenda had been married once before, when she was seventeen, to a handsome brutal punk named Billy. She could remember vividly how Billy made her hot and helpless with lust. That was how she got her daughter, Debby, from jumping into bed with Billy so eagerly that she forgot to take precautions. But Billy also beat her whenever he was drinking, which was most of the time.

Brenda left him and supported herself and Debby by working as a cocktail waitress. It was the only work she knew, and it wasn't a glamour job like some people thought. It meant hours on her feet, fending off obnoxious drunks, making slave wages. It had been that way for ten years, till she met Hal.

As Brenda dressed, she thought of Hal with a mixture of longing and nervousness. At forty he was a very attractive man, tall, muscular, with thick black hair greying at the temples. He made a good living in the sales department of a well-known company. He was bright, fun, and charming. But she hardly knew him.

In fact they'd only known each other a month. Something clicked between them the first time she served him a drink at the club, and they'd dated ever since. Brenda had refused to go to bed with him, though, hoping for a marriage proposal. She got it – but now she wondered if she'd made a mistake.