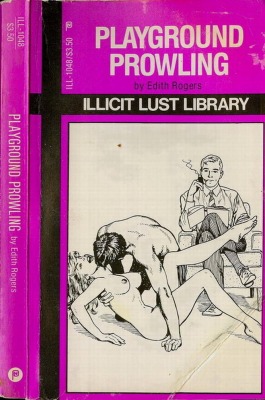 The ABC's of Sex: Incest

Oscar Wilde once wrote: "Children begin by loving their parents; as they grow older they judge them; sometimes they forgive them."

A study such as this work makes one realize that there is more truth than poetry in that statement. Many children, as they grow into their own adulthood, must find it difficult to even forgive their parents.

Elsa J. is one such person. Not yet fifteen, she has already given birth to two children the first when she was barely thirteen! As she tells her story, Elsa does not whine, nor does she alibi. The facts of her incestuous early years are quite evident; thus, her father and brothers must shoulder a great deal of the blame for her sex patterns.

The sexual escapades of the young always shock, but the average person does not seem to realize that a child who is not yet a teen-ager, nor fully developed sexually, can indulge in and enjoy the fullest of sex experiences. Elsa tells her story frankly, using the limited vocabulary of a child who never completed eighth grade.

She is a good example of the unlimited victims of a deterioration of family life: no love, no kindness or consideration, no cohesion in any effort, particularly that of guidance and discipline for the child.

"I was ten when my parents divorced. Because my mother was a compulsive, hopeless alcoholic, they gave custody of me to my father.

"Pop was all right – we got along, only I never saw too much of him. He worked two jobs to pay off the bills that Mom's drunkenness had caused.

"I don't blame Pop for anything. He had it tough. A year before the divorce, my big brother, Ed, was sent to reform school for stealing cars. He had stolen cars since he was thirteen, and this one night, he had been drinking, too he was only sixteen, then, but he drank with my Mom a lot. Anyhow, he hit an old man in a crosswalk while he was out joyriding, and they sent him to reform school.

"Pop never got anything out of my mother or brother, except grief and pain and worry. I used to feel sorry for him. I wanted to just put my arms around him and let him know that at least somebody cared about him, but I couldn't reach him. He was always so tired when he came home that, even if I was still awake, he didn't have energy enough to do much but eat, wash the dishes, straighten up the mess my drunken mother made, then get to bed.