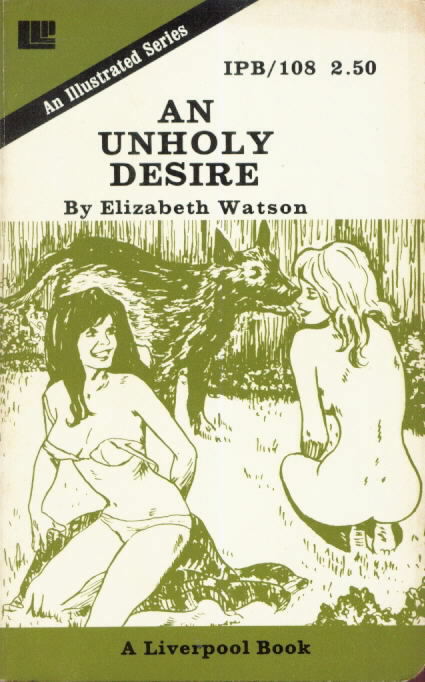 The June sunshine fell warmly through the French window of the blue bedroom onto the half-naked torso of the naked full breasted young blonde. In her simultaneous yawning and stretching, she made her full, melon-shaped breasts rise and fall as she breathed in the fresh morning air, her long blonde hair cascading sensuously over the satin pillow slip.

Ann Dexter stretched her lithe body as she awoke, blinking slightly as the cool morning air, mingling with the soft sunshine, gently stirred her awake. When she and Carl had gone to bed the night before, she had forgotten to draw the drapes.

But it did not bother the voluptuous young woman to miss an hour or two of sleep. She was feeling sunshine all over lately – particularly up between her firmly curved thighs, and the fact that Carl had been more than occupied – obsessed, perhaps a more apt description – with his work had helped to keep her natural sexual interests rather keen. And this spring warmth with its soothing, tantalizing fingers of yellow light was like dried kindling to her desires. But she didn't mind. In fact, the young woman rather enjoyed it, because then her orgasms – when they did come – were all the more lusty and overpowering.

Ann shrugged and all of the sheet fell away from her lushly opulent contoured body, revealing, beside the ripe fullness of her lust inciting breasts, her nicely rounded belly, the tiniest of waists, flawless white skin, and just the hint of straw colored hair at the center of her loins. She had the usual kind of blonde coloring, only hers was a true blonde, with not so much as a hint of peroxide: bright blue eyes and pink cheeks, with high cheek bones accentuating a perfectly shaped nose and nostrils that had a tendency to flare with just the slightest provocation.

As she stretched she fluffed out her wealth of thick, wavy blonde hair, which had only been cut twice in her life: once on her fifteenth birthday in sacrifice to her young lover who deserted her for her next door locker neighbor at high school, and the other time in retaliation to her fiancee who had called her a prude in a most untimely situation. But her husband, Carl, was crazy about her hair and, like most men, that was the first thing he noticed about her. But the men also paid rapt attention to her magnificently put together body as well. Curves no man could resist, she had been told more than once.

Ann smiled softly to herself as she thought about this in one flash of deja vu. Taking both of her protuberant pink nipples between thumb and forefinger, she toyed with them until they stiffened in self-defense, imparting pleasant sensations into her swollen breasts and a matching tingle deep down in the center of her belly. She was not an over-sexed whore, but only a normal woman who had come to enjoy sexuality of late. Consequently, every morning when she awoke she seemed to be more aroused and anxious for her husband's fond attentions than ever before.

Not that Carl noticed. Indeed, lately he didn't seem to notice much of anything. And it showed. He'd lost weight from skipping lunches, or just grabbing a bite for dinner. He and his assistant, Dr. George Everett had just started an extensive research project under the auspices of the Medical Center where he and his colleague were studying the psychological causes of unnatural sexuality and the changing sociological patterns that resulted, always with an eye to the ideal zero population growth theory. To Ann, it sounded complicated as could be, with all those big words and demographical terms and gobbledygook that she didn't give a damn about hearing, although the sexual case histories were another matter entirely.

Ann patted her breasts and then pushed her hands up in back of her lengthy hair, and let it fall again. Her pretty head couldn't really get much interested in her professorial husband's affair. All she knew was that Carl just didn't seem to care much about being in bed with her very much these days.

"Ann, have you seen my tie clasp?" came a cross voice from the bathroom, and then her husband was standing in the doorway, fiddling with his tie, his shock of graying hair falling forward over his forehead. He was clad only in his underwear and his shirt, and her eyes locked unavoidably on the spot where his genitals nestled between his legs, but as usual, there was no tell-tale bulge there to encourage her to expect more than a peck on the cheek for a good-bye.

"No, I haven't dear," sighed Ann and tried to help him find it by looking around in the bedroom a little, but she couldn't find it amongst her feminine debris littering the dresser tops and the bathroom. "Guess you're just going to have to settle for a bow tie, Carl." Finally he changed his tie and Ann slipped a housecoat over her glowing body and went to the kitchen to start breakfast.