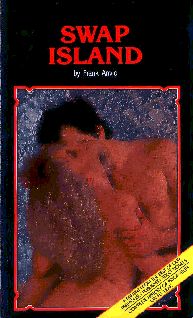 Pete Lonsdale stood on the flying bridge of his trim boat, the Sea Stud, and watched the darkening sky in the Gulf of California. He pushed his captain's cap back from his forehead and turned away from the wheel to look at the after deck below. His wife, Bunny, a startling blue-eyed blonde, sat on the railing talking to Darlene Baker, a fragile beautiful brunette sitting in a deck chair next to her husband, Jim, Pete's accountant.

Both women wore bathing suits, Bunny a two-piece bikini which showed off her figure to advantage, and Darlene a one-piecer with enough holes cut in it to make Pete want to crawl inside it and pull her body out and ravish it. Pete had to use a lot of willpower to keep from getting a hard-on looking at his accountant's wife right then.

The two girls, Olive Baker, 16, and Cathy Lonsdale, 15, were in the cabin, out of his sight, playing cards, he knew. Olive looked a lot like her mother, except that her hair was long and light brown where her mother's was short and raven dark. Looking at Darlene, now, from his high perch, Pete realized how much he wanted to make love to her.

She was deeply tanned and the bold wine-red bathing suit she wore was tight around her hips. Pete imagined that he could see the outlines of her pussy, the swollen ridges of her mons where the suit was tightest, at her crotch. He could see her pubic hairs because she had a luxuriant growth, that in the tight "nude look" suit she wore, overflowed, stuck out from underneath in provocative abundance.

Darlene was only thirty-two and she looked nineteen. Her breasts were still firm and shaped, her tummy flat. Her legs were shapely, emphasized by slender ankles and well-proportioned calves. For her size, five foot four, Darlene was a finely wrought package of sexiness. Pete looked down at her and thought how good it was going to be when he took that body of hers. Jim, her husband, was already half-bagged on Tecate beer and was spineless enough not to object when Pete asked him to exchange his Darlene for sex with Bunny.

Pete knew his employee wouldn't object even if he asked him to dive over the side of the specially-built Chris Craft and swim back to San Felipe. If Pete told him to do this, Jim would, without serious question. Jim was a damned good accountant but that was the very reason he was no damned good as a red-blooded human being. Jim lived in a world of figures and didn't know shit about anything else. Pete chuckled to himself.

Jim Baker was going to get a good education on this trip. Pete licked his lips and shouted down to the group below. "Hey, how 'bout a beer up here?"