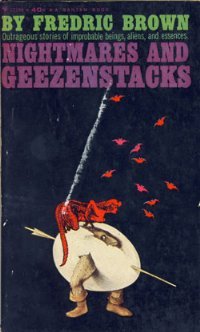 Sir Chauncey Atherton waved a farewell to the Sherpa guides who were to set up camp here and let him proceed alone. This was the point beyond which they would not accompany him. This was Abominable Snowman country, a few hundred miles north of Mt. Everest, in the Himalayas. Abominable Snowmen were seen occasionally on Everest, on other Tibetan or Nepalese mountains, but Mt. Oblimov, at the foot of which he was now leaving his native guides, was so thick with them that not even the Sherpas would climb it, but would here await his return, if any. It took a brave man to pass this point. Sir Chauncey was a brave man.

Also, he was a connoisseur of women, which was why he was here and about to attempt, alone, not only a dangerous ascent but an even more dangerous rescue. If Lola Gabraldi was still alive, an Abominable Snowman had her.

Sir Chauncey had never seen Lola Gabraldi, in the flesh. He had, in fact, learned of her existence less than a month ago, when he bad seen the one motion picture in which she had starred—and through which she had become suddenly fabulous, the most beautiful woman on Earth, the most pulchritudinous movie star Italy had ever produced, and Sir Chauncey could not understand how even Italy had produced her. In one picture she had replaced Bardot, Lollobrigida and Ekberg as the image of feminine perfection in the minds of connoisseurs anywhere. The moment he had seen her on the screen he had known that he must know her in the flesh, or die trying.

But by that time Lola Gabraldi had vanished. As a vacation after her first picture she bad taken a trip to India and had joined a group of climbers about to make an assault on Mt. Oblimov. The others of the party had returned; she had not. One of them had testified that he had seen her, at a distance too great for him to reach her in time, abducted, carried off screaming by a nine-foot-high hairy more-or-less-manlike creature. An Abominable Snowman. The party had searched for her for days before giving up and returning to civilization. Everyone agreed that there was no possible chance, now, of finding her alive.

Everyone except Sir Chauncey, who had immediately flown from England to India.

He struggled on, now high into the eternal snows. And in addition to mountain climbing equipment he carried the heavy rifle with which he had, only last year, shot tigers in Bengal. If it could kill tigers, he reasoned, it could kill Snowmen.

Snow swirled about him as he neared the cloud line. Suddenly, a dozen yards ahead of him, which was as far as he could see, he caught a glimpse of a monstrous not-quite-human figure. He raised his rifle and fired. The figure fell, and kept on falling; it had been on a ledge over thousands of feet of nothingness.

And at the moment of the shot, arms closed around Sir Chauncey from behind him. Thick, hairy arms. And then, as one hand held him easily, the other took the rifle and bent it into an L-shape as effortlessly as though it had been a toothpick and then tossed it away.

A voice spoke from a point about two feet above his head. “Be quiet; you will not be harmed.” Sir Chauncey was a brave man, but a sort of squeak was all the answer he could make, despite the seeming assurance of the words.

He was held so tightly against the creature behind him that he could not look upward and backward to see what its face was like.

“Let me explain,” said the voice above and behind him. “We, whom you call Abominable Snowmen, are human, but transmuted. A great many centuries ago we were a tribe like the Sherpas. We chanced to discover a drug that let us change physically, let us adapt by increased size, hairiness and other physiological changes to extreme cold and altitude, let us move up into the mountains, into country in which others cannot survive, except for the duration of brief climbing expeditions. Do you understand?”

“Y-y-yes,” Sir Chauncey managed to say. He was beginning to feel a faint return of hope. Why would this creature be explaining these things to him if it intended to kill him?

“Then I shall explain further. Our number is small and is diminishing. For that reason we occasionally capture, as I have captured you, a mountain climber. We give him the transmuting drug; he undergoes the physiological changes and becomes one of us. By that means we keep our number, such as it is, relatively constant.”

“B-but,” Sir Chauncey stammered, “is that what happened to the woman I’m looking for, Lola Gabraldi? She is now—eight feet tall and hairy and—”

“She was. You just killed her. One of our tribe had taken her as its mate. We will take no revenge for your having killed her, but you must now, as it were, take her place.”

“Thank God for that,” said the voice above and behind him. He found himself turned around, held against a huge hairy body, his face at the right level to be buried between mountainous hairy breasts. “Thank God for that—because I am an Abominable Snowwoman.”

Sir Chauncey fainted and was picked up and, as lightly as though he were a toy dog, carried away by his mate.