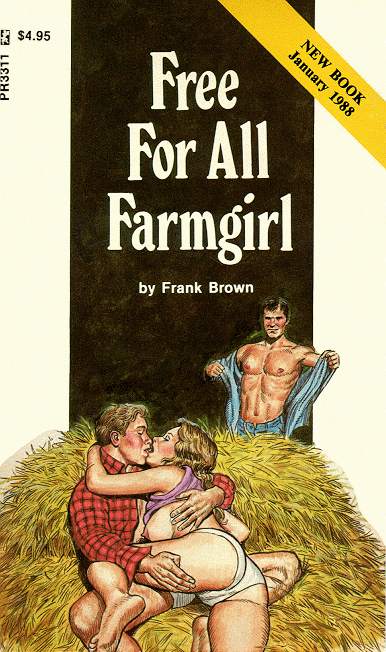 Free for all farmgirl

Free for all farmgirl

It was a hot Sunday morning on the farm, and Debby giggled to herself over having managed to avoid church for once. She sat on the swing in the front yard, dressed in nothing but her turquoise-blue shorts and a pink blouse, her tanned legs and feet glinting satiny in the sunlight, her sandy-blonde hair bouncing against her shoulders as she swung and twirled on the swing, which was suspended from a limb of a tall pine tree. As she played on the swing, she was able to look down – past the nearby road and out over the valley. Behind her was the house and barn and the other farm buildings belonging to her parents, and beyond them were the pastures and fields. Sandstone bluffs stood boldly out of the side of a hill where the family property met the horizon.

"I'm free!" Debby squealed, kicking her legs up and wide as she swung forward. She laughed as the air rushed into her half-open blouse and tickled her well-developed teenage tits.

This was the first time in her life she'd managed to avoid going to church with her parents on a Sunday morning. She dreaded going to Sunday school, and then to the endless church service during which the minister ranted and raved at the congregation, terrorizing everybody with threats of damnation and hellfire. Then there was the church social afterwards, during which she was always forced to sit with her mother and all her mother's lady-friends, listening to their gossip and answering their prying questions. It was those gossipy, prying old witches who had gotten her best friend Roxanne banned from the church – not that Roxanne gave a damn – and who were also responsible for Debby's parents forbidding Debby ever to speak to Roxanne again.

"Dumb old cows!" Debby shouted, thinking of those nosy old biddies. She couldn't imagine that any of them had ever been young like her and Roxanne. She couldn't imagine how they'd ever managed to have kids – probably through artificial insemination, or virgin births. They all thought themselves as holy as the Virgin Mary anyway.

Debby jumped off the swing. She had the itch to do something forbidden. She'd already pretended to be deathly ill, which had gotten her out of church this morning. Her mother had felt her flushed forehead and had decided that Debby actually did have a fever. If she'd actually had any fever it had come from thinking about some of the things Roxanne had told her about before Roxanne had been torn from her life. Debby could hardly imagine that any of those things Roxanne had told her were true, but they sure were intriguing, and they got her all hot and bothered.

Debby clutched her pussy through her shorts. She felt like going into the house and jerking off – something Roxanne had taught her how to do. Then she realized that this morning she could actually call Roxanne. For once she could talk on the phone without one of her parents being within ear-shot. For once all the nosy, eavesdropping old biddies who shared the party line were safely it church. Her heart slamming with excitement, she bounded barefoot up the front steps of the house and across the front porch and through the screen door, letting it slam shut behind her as she'd never dared do when her parents were home.

She dialed Roxanne's number and a sleepy voice answered.

"Debby?" The voice perked up. "I don't believe it! You're still alive. I haven't heard your voice in over a month."

"I got out of going to church this morning," Debby said. "I'm home all alone, so I had to call you."