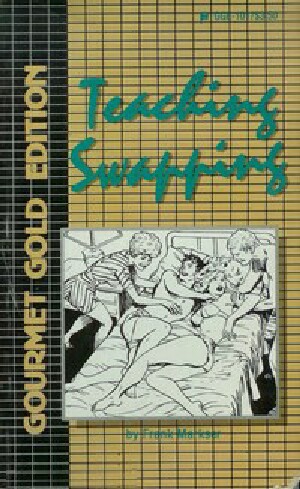 The warm spring had finally come to Winter Garden, Florida. The light overland breeze from the nearby Gulf of Mexico no longer held that slightly chill dampness of a week ago, and the southern sun hanging low in the west was like a molten gold coin in the perfect unbroken blue of the sky. Everybody was soaking up the sun, starting their first tan of the year with the still gentle rays – another week and it would be so scorching hot here by the pool the skin would blister and peel, but now it would slowly foster a bronze, bum-proof skin good for the rest of the summer.

At the semi-exclusive Teachers' Country Club, the fine weather had brought out the members in droves. The swimming pool glistened blue-green beneath the gracefully dipping palm trees, and the bolder teachers had come with their swim suits prepared to take advantage of the inviting, freshly cleaned pool.

Lying side by side at the edge of the sparkling clear water, two attractive wives so much alike they could be twins were exposing as much of themselves to the sun as they could in public. They lay as though asleep or dead, only the slow rise and fall of the smooth tautness of their bellies attesting to the fact that they were very much alive.

Watching the two blondes sunning themselves, Fred Furness wondered for the hundredth time why the one who was Tommy Singleton's wife, Linda, turned him on so much. Sure, she had long, sleekly tapering legs that flared out from her wide inviting hips into shapely thighs and calves. But so did his own wife Grace lying beside her. True, she had firmly pointed breasts out to here, but they were no better than Grace's. Fred couldn't deny that Linda Singleton had lusciously rounded ass-cheeks, almost completely visible under the scanty bikini when she walked, but Grace would not suffer from comparison.

Suddenly, he thought he had the answer to his own question.

Maybe it was because Linda Singleton thought she was above it all. She was so aloof in her manner that it somehow bugged Fred Furness. It was as though she knew his mind was obsessed by sex and passion, and to her that made him dirty, beneath contempt. She never seemed to vie with the other women for the attentions of men, no matter on how innocent a level it was conducted. Most of the wives occasionally flirted with husbands not their own, even the women who would never dream of being unfaithful and going to bed with another man. But Linda had had a very puritanical upbringing. She thought that that kind of thing with any man except her own husband was an unforgivable transgression against her marriage vows. In other words, he thought, she was what he called a goody-goody girl, and such people always presented a challenge to him he could not ignore.

It was true, he reflected, that the Singletons had been married only a few weeks, and maybe her attitude was understandable. But Furness and Tommy Singleton had been colleagues as high school coaches for a long time, and he had known his friend's new bride Linda almost as long as her husband. They had been dating each other for over a year before finally getting married, and from Tommy's stories, as well as from his own personal observations, Fred had sized up her prudishness. He had even warned Tommy in private that such a woman might prove to be a problem after they were married. Naturally, Tommy could only think of the delights her body promised him, and Linda had had enough instinctive femininity to let Tommy get tantalizingly close from time to time, always putting off the moment of truth until after the wedding. The old carrot-in-front-of-the-horse game, Fred mused sarcastically.

As he watched from his rattan chair near the poolside where he and Tommy Singleton had been having a drink, the two wives walked past him toward the low diving board. They were going to cool themselves in the water again after fifteen minutes in the hot, slow-broiling sun. Fred Furness deliberately let Linda Singleton catch him staring lasciviously at her swinging loins barely covered by the brief white bikini. When she walked, she inadvertently swayed her hips in an enticing manner that some women had to practice for years. Her blue eyes opened wide at his undisguised interest, and he playfully winked at her, making the action obscenely suggestive enough to make her blush. She jerked her head disdainfully, turning her eyes away from his and forming a little pout of disgust with her full lips that had a damp sparkle to them.

He decided then and there that he would find a way to get into her prissy little panties, and soon. He would teach her to treat his natural impulses as though they were crude and coarse. The self-satisfied little bitch, he growled softly to himself as he made a forced smile for his wife's benefit. He could see that Grace had noticed what had happened and sensed what his reaction would be. Thank God, he thought, that Grace felt about these matters just as he did. In the past she had even helped him to make out with other women, and he had never hesitated to let her have a little fun on the side either. They had found after the first five years of their marriage that an occasional taste of "strange", as they called it, made what they had together even better.