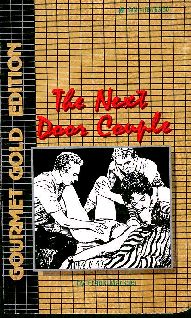 The Next Door Couple

The Next Door Couple

Medoc Circle is a street like many others in the better class suburbs of Southern California, and, if any street could be called typical of the affluent middle class America, the little cul-de-sac would qualify.

The Stanleys, Joan and John, lived at 1503 Medoc Circle. Next door at 1505 were Bill and Laurie Kent.

Like the furnishings in their houses, the two couples differed. At twenty-seven, Joan Stanley was a breathtakingly sensual platinum blonde whose tall svelte figure turned the heads of men and woman alike. John, her ruggedly handsome husband had a wild thatch of straw-colored hair and a dark tan which reflected his days spent at the harbor as a yacht broker. They were, as practically everyone would testify, happily

married and well adjusted emotionally, sexually and all other ways of importance.

In contrast to Joan’s stunning blondness, Laurie Kent was a petite twenty two year old redhead with green eyes, a pert turned-up nose that was bridged by a rainbow of freckles and a sweetheart face. The vivacious little redhead, in turn, presented a wild contrast to her staid twenty-five year old husband Bill who was -much to her dismay – almost the perfect specimen of the no-nonsense public accountant.

Like many other jobless, childless wives, the two young women spent a lot of time together while their husbands worked. Actually, they could be found at least once a day sitting by the Stanley’s swimming pool smoking cigarettes, drinking coffee and exchanging gossip.

Today was starting out to be pretty typical. In the last half hour the two bored young wives had sat by the pool, the sun streaming down on their lushly ripened, bikini-clad bodies, sipping the black coffee that Joan had brewed for them.

Laurie glanced over toward the blonde languidly lying on her stomach. A thin moustache of perspiration was on Joan’s upper but it was the heavy-lidded expression that drew the younger girl’s attention. She correctly interpreted the look as one of sexual satiation, and she couldn’t resist feeling a sudden pang of envy. Joan had admitted that she and John generally had sex every morning before he went to work… and again at night.