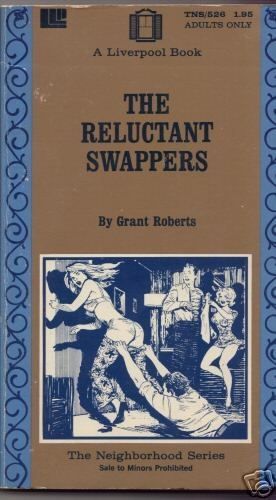 Ron Fleming felt relieved as he finally began to free himself from the clutches of the artificial redhead who chattered mindlessly at him in a secluded corner of the smoky, half-lit room. He sensed the girl making one last attempt to catch his attention, as she punctuated a particularly inane remark by leaning her empty head up against his shoulder in a tipsy parody of suggestiveness, smiling up at him with a naivete as transparent as the watery drink she was holding in her hand.

Ron pivoted expertly, caught her free arm in his, and maneuvered her effortlessly to a small sofa, where he'd spotted a small, quiet, mousy man sitting silently alone with a glass of untasted ginger ale clasped tightly in both hands Ron hurried through an informal introduction, not knowing either of their names, and then turned back to the party leaving them already engrossed in a vigorous smiling, one-sided conversation.

Moving his tall, handsomely built body through the strident jumble of cocktail conversation, Ron made his way once more to the bar, stopping along the way to pick up another odorless, tasteless cheese thing from a tray filled with unimaginative snacks. He was famished. There was nothing worse than coming to a party expecting dinner, only to find that there was none. It took a particular kind of host to invite people at 7:00 in the evening and ignore the fact that they just might possibly think the early hour indicated dinner, and Oliver Lewis was just such a host. Ron poured himself out another drink, passed a hand through his dark, styled hair, and wondered why the hell he'd come in the first place.

He spotted his wife, Sharon, through the maze of lighted cigarettes and clinking glasses, standing across the room in conversation with a short, balding man. Ron could see her forcing her smiles, and nodding her head in response to his undoubtedly boring conversation, and he smiled to himself as he wondered just what purpose this kind of party had, except to allow a group of dull people to infect their friends with the emptiness of their own lives.

He noticed that Sharon had caught him looking at her' and saw the plea to come and save her written all over her face. He smiled and waved teasingly at her, and then made his way through the crowded room to her.

As he approached, he could hear the balding man saying something about what a wonderful time he and his wife had had the year before she'd died, touring the ancient Aztec ruins of central America.

"Oh darling," said Sharon, interrupting her tormentor gratefully, "I'd like you to meet Mr…?" She turned to the short man questioningly.

"… Larsen is the name, Nils Larsen. I'm Norwegian." And he stuck out a small, pudgy hand.

"Well, I thought I saw: something of the Viking in you Mr. Larsen. I'm Ron Fleming." Ron took the preferred hand, felt it rest limply in his grip for a moment, and then restored it to its owner.