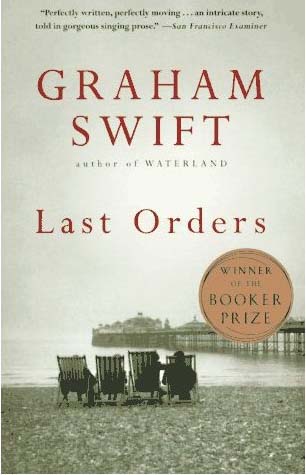 Last Orders
The Man Booker Prize Winner—1996 The author of the internationally acclaimed Waterland gives us a beautifully crafted and astonishingly moving novel that is at once a vision of a changing England and a testament to the powers of friendship, memory, and fate. Four men—friends, most of them, for half a lifetime—gather in a London pub. They have taken it upon themselves to carry out the “last orders” of Jack Dodds, master butcher, and carry his ashes to the sea. And as they drive to the coast in the Mercedes that Jack's adopted son Vince has borrowed from his car dealership, their errand becomes an epic journey into their collective and individual pasts. Braiding these men's voices—and that of Jack's mysteriously absent widow—into a choir of secret sorrow and resentment, passion and regret, Graham Swift creates a work that is at once intricate and honest, tender and profanely funny; in short, Last Orders is a triumph.