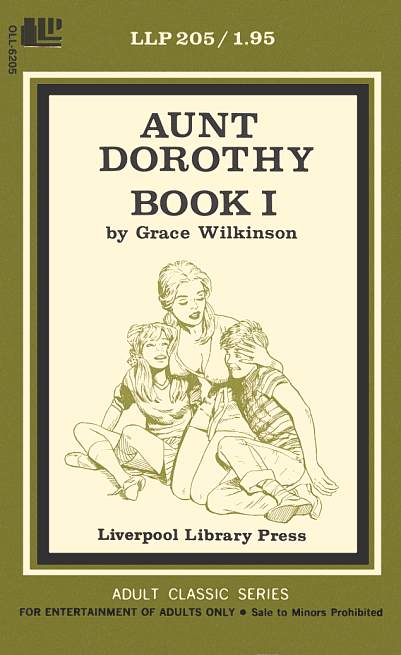 "Mmmmm…" Dot murmured looking at Art across her martini glass. "This is delicious… I'm glad you talked me into having it!"

"Man, I can see the exact outline of her nipples…" Art thought as he gazed across the living room at his voluptuous thirty-year-old sister-in-law. His mind went back to the night he had kissed her… not once, but for almost an hour in the garden of her house. That had been a few months ago and ever since Dot had been very careful when she was around him. Something about the way she looked tonight though, made the old emotional feelings he had about her return. Even though they were together to discuss the boy, still he couldn't take his eyes off the amply proportioned orbs of her globular breasts… the way they jutted from her blouse… the thin silky covering only accentuating their natural curves. Her legs too, looked wonderfully slender and exciting, the way she had them curled under her on the couch like that.

He wondered what it would be like to feel her breasts again, the way he had done that night several months ago. She had seemed to like it then, he recalled, remembering her heavy excited breathing as he held her tight up against his body, the soft giving forms of her flesh molding completely to his, all of her weight there in his arms. Beneath his fingers, the firm upright mounds of her flesh had moved slowly as her breath came haltingly. His tongue had worked furiously within the wet confines of her mouth. Slowly he had backed her against a tree and there had ground his groin steadily into hers, the erect rod of his penis forming a hard rocklike sheath against her belly.

"You say Joe is doing well in school…" Dot said clearing her throat. The silence had been long and she felt uncomfortable beneath Art's frank stare. She wondered if he too was remembering that night out in the garden. She had thought of nothing else since she walked in the door tonight. For one thing, the argument with her husband, Nick had made her unusually susceptible to Art's tenderness… to his good-looking smiling face… to the fondness she had always felt for him, even when her sister was still alive. But Betty wasn't alive now and that was part of why she was here… to see about Joe… her own son who had been raised all his life as Art and Betty's child.

"Yes, Joe's doing perfectly well in school, Dot," Art answered, sipping his drink. "Both he and Lee are on the honor roll as a matter of fact. For kids their age, that's quite something!"

Joe was fourteen and Lee, their young daughter, thirteen – and Art recalled how much trouble he himself had been to his parents at that age.

"Yes, they're both good kids, Dot… I wouldn't worry about Joe if I were you. You know he adores you… and I think our original decision about him was correct." He wanted to finish this conversation as quickly as possible. Somehow, he couldn't really concentrate on the kids with Dot sitting across from him looking like an angel in the yellow lamplight. Her blonde hair softly caressing her peach colored cheeks, the limpidness of her blue eyes fringed with long silken lashes… the tempting expanse of calf that showed beneath her pleated skirt… all these things made it extremely difficult to concentrate on the topic at hand.

"I guess you're right…" Dot said hesitantly. It had been so hard to realize that her son would never call her mother… to him, she would always be Aunt Dot because of that night, fourteen years ago when, a frail blonde child herself, she had given birth to him and her older sister Betty, then newly married to Art, had offered to take him as her own. That way, they all figured, Dot could lead a meaningful life, one day meet someone who was worth marrying, unlike the louse who'd left town at the suggestion that he had gotten a sixteen-year-old girl pregnant. And the boy wouldn't have to go up for adoption. Yes, at the time, it had seemed a good idea, but Dot still felt pained by the circumstances. She was married now, after years of teaching grade school in the Philadelphia school system, and well married according to many of the other young matrons in town, to the busy head of a main line real estate firm. But even Nick had suggested, when she had confessed her indiscretion to him, that it would be best not to tear the boy away from the people he thought of as his real parents and she supposed they were right. Yes, perhaps it was the best course after all.

The martini was making her feel unusually mellow, and there was something definitely soothing about being in Art's house, the comfortable suburban home her sister had loved so much. She seemed to sense the children sleeping in the bedrooms beyond the closed living room door. There was a peacefulness in the air and slowly she abandoned her worries about her son. Finally, she let Art draw her into a conversation about more pleasant things.

When he got up to fix her another drink, she protested meekly and then smiled and accepted the cool glass. After all, it was silly not to. Didn't she deserve to have a good time every now and then? As if having read her mind, when Art handed her the frosty glass he said: "You deserve a pleasant evening, Dot. Why I haven't seen you smile in ages. Are you and Nick getting along any better these days?"