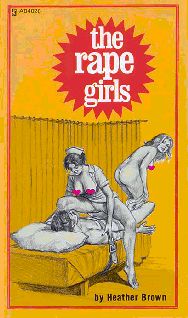 Kimberly Marchand, her tits and ass swaying seductively, walked quickly down the street. Her car was parked a few hundred yards away and once she was in it and driving she would feel relatively safe. But, now she felt apprehensive.

That was the thing about being a nurse, Kimberly thought, the hours were terrible. Working the night shift at the hospital, as she had to do every three months, threw everything out of kilter for her, and, what's more, exposed her to walking alone in the middle of the night.

Her career as a registered nurse had promised so much in the beginning – the chance to help other people, working with famous doctors, some of whom she had hoped would be eligible for marriage. Now, as she was starting to push 30, Kimberly found herself getting tired of the whole thing.

The thing which depressed Kimberly most, however, was the doctors. When she had gone into nursing, she had always assumed that she might become romantically involved with a doctor or two. As it had turned out, Kimberly had become involved with a doctor – Dr. Jim Spencer, a surgeon, and marriage was a very important consideration in the relationship. Unfortunately, marriage entered into the situation because Jim already had a wife – and three children – and despite frequently promising Kimberly he was going to ask for a divorce, after two years of seeing her secretly he was still as married as ever.

Kimberly had just finished a scene with Jim before she had left the hospital. After surgery, Jim had hustled her into the privacy of the pharmacy and had started running his hands over her body through the thin fabric of her nurse's uniform, caressing her tits and kneading her nipples through the material. Jim had felt her up like this many times during working hours, and they had fucked more times than she could remember in various out-of-the-way places of the hospital. But tonight Kimberly wasn't having any.

As Jim pawed her tits, Kimberly felt repelled by his hands. She pushed Jim away and told him she was going home, leaving him open-mouthed as she stalked out of the pharmacy.

Kimberly felt a wave of relief pass through her as she sighted her car. She would go home and fix herself a stiff drink, she decided, and then get into a hot tub. "Maybe things will be better tomorrow," she said to herself as she leaned over to unlock the door to her car.

As she inserted the key into the door of her car, suddenly her breath was cut off by some powerful force slamming against her windpipe. She started to scream, but all that came out was a gurgle as she fought to breathe. Then she was painfully straightened up as her neck was yanked back and a knee shoved painfully into the small of her back, arching her spine painfully.

"Okay, baby," a voice growled. "Is this gonna be easy for both of us, or are you gonna tight me? Believe me, one way or the other, I'm gonna enjoy it."